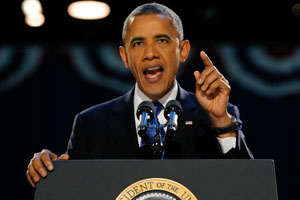 Barack Obama has reclaimed his seat as president of the United States of America after an election night full of drama. The race was close for a while at the start, but as the night went on Obama claimed swing state after swing state before CNN projected him to win at 11:18 p.m.

Reactions have varied as citizens across the country slowly recover from the election madness. Twitter was blowing up with tweets containing the hashtags #election2012, #obama and #romney.

“No matter my #president, I’m still proud to be #American,” user @samdogmilli tweeted. “Y’all take for granted how blessed we are to have a say!”

While some were happy with the results, others took a more extreme approach in how they voiced their opinion.

The highlight of the night on Twitter though happened right after Obama was projected as the winner. The president’s campaign tweeted a picture of the president embracing his wife Michelle. This photo was retweeted more than 675,000 to make it the world’s most tweeted image since the inception of Twitter.

Campus was abuzz as the polls started to close and votes started coming in.

The VSU NAACP, College Democrats and Republicans hosted an election watch party, but two words of that title may have fallen by the wayside.

“I was excited to see that people my age actually cared about the election,” Paige Dumas, a sophomore biology major, said. “Unfortunately, the extra events took away from what was going on.”

The ballrooms were packed with hundreds of students eager to see who would become the next president of the United States.

Incumbent Barack Obama was re-elected, but in the ballroom state projections and conversation about the political climate of the evening were mostly overshadowed by games, raffles and unnecessary fashion shows to keep the attention of the masses.

“I didn’t even know what was going on half the time as they announced the events through the evening,” Michael Jennings, a sophomore engineering major, said. “I liked the turnout at the event, but there were a lot of people there just to hang out and not for the election. The issues were not important as long as Obama won, to most. No one listened to the guy who was on the microphone and people only cheered when they saw states that went Obama’s way and didn’t pay attention to anything else on television.”

Others were just excited to be a part of history being made, and enjoyed following each electoral vote.

“I love the atmosphere that surrounded the election,” Donald Justice, a freshman math major, said. “The night was something to remember.”

Others had deeper thoughts surrounding the election.

“I found last night to be the real voice of America,” Dumas said. “Obama has such a diverse group of voters and that speaks volumes. It was a tight race at first and in the momentum that led up to the voting, it looked like Obama would lose. Fortunately, I was witness to a different outcome. It was a great election and the best man won.”

Ryan Baerwalde, SGA President and VSU College Republican Chairman, was honored to see everyone showing support for their candidate of choice.

“It was really great to see so many students and student organizations coming together to watch a very important political event,” Baerwalde said. “I would say the pros include the great set up, good food, the way the event was trying to be as unbiased as possible.”

Baerwalde also expressed his concerns about the lack of political diversity.

“The only con would be the lack of political diversity in those that attended,” Baerwalde said.  “Even though I have obviously got a bit of a bias being Chairman of the College Republicans, it was quite obvious to all that we were vastly outnumbered.”

As the projection became more accurate, yells of “Obama!” could be heard across the VSU campus as people ran up and down the pedestrian mall. Many students are optimistic about the future as Obama moves into his second term.

“[I am] happy that Obama is being elected,” Antonio Boykins, senior sociology and psychology major, said. “It has nothing to do with race. It has more to do with morals and ethics.”

While some students were critical of Obama’s first term, they still had respect for the winner.

“[I am] disappointed, but hopeful” Sarah Rice, senior international business major, said. “I think that no matter what we have to support our president, and hopefully he will actually accomplish something and stop spending money we don’t have.”