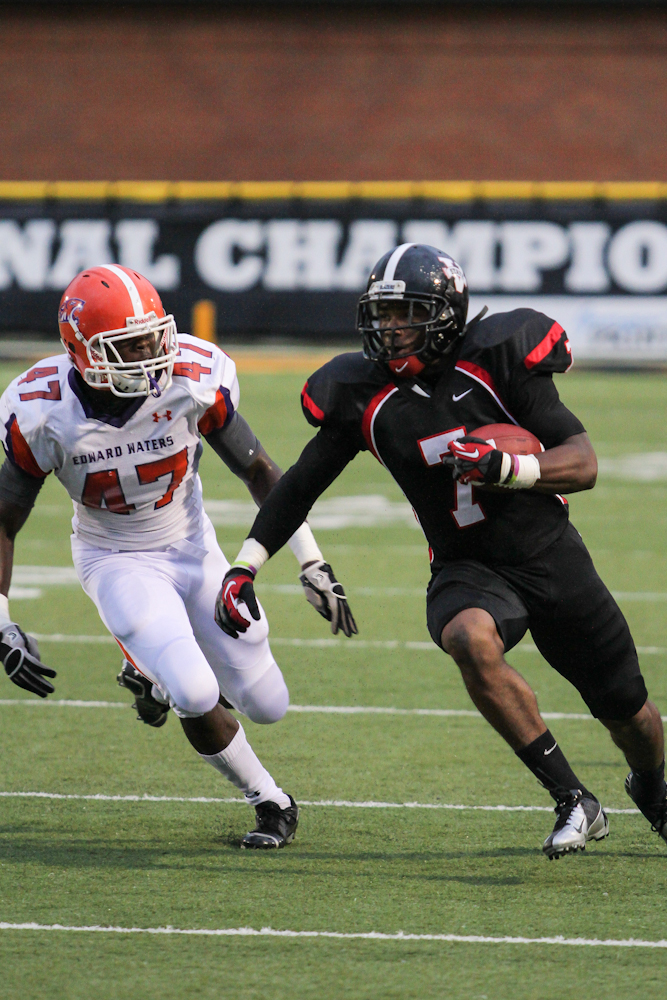 And Then There Were Two

And then there were two.

The Blazers will fight for their second title in five years while the Rams look to make history becoming the first Historically Black College to win a NCAA D-II national championship.

This is the first ever meeting between the two schools and should make for a great contest Saturday afternoon.

Now four quarters away from national prominence, the Blazers have come a long way since their last loss which was to West Alabama back in September.

“When we walked into that locker room after that, we said we want another shot a West Alabama and the only way to do it is to run off six games in a row,” said VSU head coach David Dean. “And those guys have been focused one week at a time, they live in the moment, they play each snap like it’s there last. They’ve been very methodical in everything they’ve done and put themselves right back in the position that we wanted to be in when we started.”

Regardless of compiling nearly 500 total yards against the No.3 defense in the nation last week, the Blazers are the underdogs against the undefeated Rams.

VSU in the past few games had the duties of defending option-based offensives however WSSU runs a spread type offense similar to the Blazers led by senior Kameron Smith.

The 2012 CIAA offensive player of the year has recorded 3,042 yards passing yards with 42 touchdowns, 9 interceptions this season.

Smith could potentially be a problem for the Blazers if he gets into that uncontainable rhythm with his talented receiving corps which includes Jahaaun Butler, Jameze Massey, and Jamal Williams.

If anyone on defense needs to be on their P’s and Q’s (term of phrase), it’s the Blazer secondary.

The former Navy quarterback enters the final game of the year averaging 234 passing yards a game.

With Rams running back Maurice Lewis playing well also, VSU is susceptible to give up big yardage plays which have hurt them in several games this season.

If the Blazers can limit those numbers and continue to not turnover the ball on offense, they’ll put themselves in great shape to bring the hardware back to title town.

This game will feature two of the nation’s high scoring offensives both averaging 42 points a game.

Expect VSU quarterback Cayden Cochran to continue his stellar performance in the playoffs, therefore it’s easy to doubt that this will be a low scoring game.

Cochran tallied 278 passing yards and two touchdowns in the Blazers 35-19 win over MSU-Mankato.

The last time VSU played in Braly Municipal Stadium this past October, they came away with a convincing win over North Alabama fueling their current win streak.

VSU plans to be victorious again on this business trip to Florence.

The Blazers compete in their fourth title game in the past ten years Saturday.

Win or loss VSU head coach David Dean is more than proud of his team.

“They’re a special group. They’re a lot of fun to coach. They do anything you ask to them to do. That’s why you get into this business, to coach guys like these guys,” said Dean.