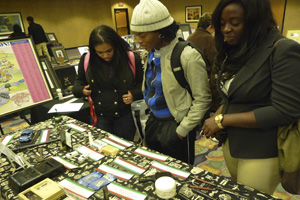 The exhibit will be from 11 a.m. to 4 p.m. today in the University Center Magnolia Room.

Angela Jennings, the owner and the curator of the museum, established Sankofa in 1995 as a way to teach her nephew and other young people about the history of African Americans and their unique and rich heritage.

Sankofa was named after the Ghanaian term, which means “use the wisdom of the past to build the future.”

The exhibit displays pictures, books, paintings, fetters and inventions by African Americans from the 1860s to the present.  The exhibits were collected by Jennings as she travelled through the U.S., Virgin Islands, West Africa and Europe.

Jennings is from Denmark, S.C. and has travelled to over 2,000 different universities to introduce African American diaspora and experience.

“I’d like students to know how African Americans came to America, and we’re the only people that were not brought here voluntarily,” Jennings said. “We were forced here to build this nation and were not able to speak the language—now we can see the accomplishments of the enslaved Africans.”

During the exhibit, Jennings presented stories and dramatizations about selected periods and historical figures to allow those in the audience to experience both the pain and the pride of the history portrayed.

During Wednesday’s exhibit showing, many VSU students were shocked by the graphic pictures of lynching.

“That was very extreme,” Akua Twenewaa, a junior psychology major, said. “How can human beings be so cruel to do such a thing even to a baby?”

Other students agreed with the impact of the exhibit.

“I’m from Ghana and it was really interesting to see what impact it makes on other countries from different perspectives,” Jolene Abrokwa, a junior psychology major, said.