However, the match did not play out as smoothly as the final score would indicate.

VSU never led in game one until taking a 25-24 lead over the Wolves. Leading up to that point, VSU displayed lots of sloppy play, which had them down 15-10 early on.

Following a timeout, VSU responded by tying the score at 16, then again at 20, but four straight points by the Wolves had the Lady Blazers in desperation mode to not let go of the game.

VSU responded by scoring five straight points of their own, taking its first lead and would pull the victory out by a score of 27-25 (games must be won by at least two).

“Jenna and Destiny in particular did a really good job terminating today. That was a key factor for us. We didn’t lose our composure,” Mike Swan, VSU volleyball head coach said.

VSU jumped out to a 6-1 start, which forced UWG to take a timeout, but it would help the Wolves very little. VSU would take game two by a final score of 25-12.

“The second game was more of what we were expecting. There we were serving smart. Servicee was really good, we didn’t break down, and our hitters were terminating,” Swan said.

VSU got out to an 18-12 lead and for a while it seemed they would secure the game with ease. But in a flash the Wolves cut back into the deficit, and even took the lead at 21-20. Just like in game one, a frustrated coach Swan had to take a timeout to get his players on the right page.

“[West Georgia] run a really quick middle offense, and we have the tendency to be really slow  reacting a lot of times, when we should be a lot quicker in the air.”

Following the timeout VSU quickly regained the lead at 22-21, and wouldn’t let it up. They took the game and the match by a final score of 25-23.

The win improves VSU’s conference record to 9-7, which keeps them on pace to grab the two seed in the GSC conference tournament. A huge accomplishment that would be, as the top two seeds get a first round bye in the GSC tournament.

By contrast, the loss for West Georgia, who was tied with Christian Brothers for 3rd in the GSC, drops them to 7-8 and now 4th in the conference.

VSU will be back in action in the Complex on Tuesday as they face off against West Florida, the top ranked team in the GSC.

This article was written by Neil Frawley. 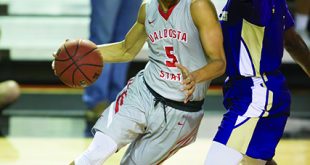 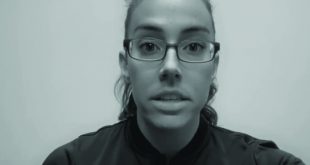 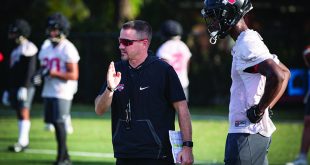