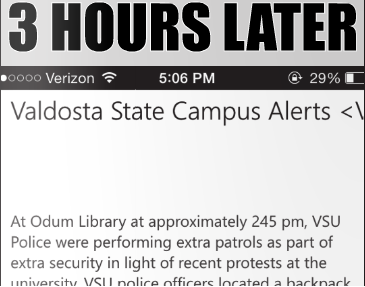 Better late than never? Not this time. As of last Friday the campus has seen a lot of protest and demonstrations. On Tuesday many students received an email from the university stating that one of the lead protesters who has been walking on the flag had a firearm on his person while on the campus.

Students received this email almost three hours after campus police found the firearm in a bag. Many students were still on campus and going to class. Why is this a problem? Because our safety was in danger. Faculty, staff and students should have been notified right after the first weapon was found or when the university got whiff of it. Not only were we ill-informed, but we were all able to walk around campus freely. The campus should have been on lockdown.

Many students have voiced their concerns over their safety on this campus. Many think classes should be cancelled until the suspect has been found. These are troubling times for our VSU, and the police department has failed to keep us informed in the now. President McKinney stated in his very brief press conference that the safety of everyone on campus is his top priority, but why have such a long wait time to inform us? Many students were scared and concerned.

With the information coming late, social media has been abuzz with anger and concern, and we should be angry and concerned. If there is a threat on our campus, we need to know immediately in order to keep ourselves safe. Campus has no problem emailing us about every little robbery 10 minutes after it happens, but cannot let us know of a firearm on the premise.

Other students have commended McKinney for keeping campus open and going about business as usual. It is hard to say whether campus should be closed while law enforcement searches for the suspect, but they do need to figure out a speedier way to get us the most accurate information. If campus police can send out a notice about a robbery and then send us a second one to retract it, then they can get this information out to us faster and keep us updated.

2015-04-23
Kayla Stroud
Share
Previous The science behind sticking to your race
Next TIDAL continues to flop hard; Ariana Grande and Big Sean call it quits