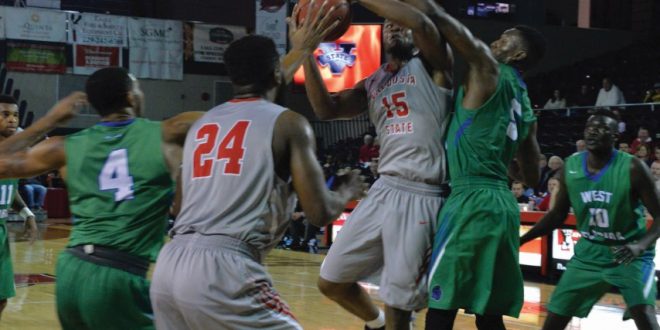 After suffering a devastating defeat to Delta State, the VSU Men’s Basketball team lost its first game in 11 outings.

The Blazers faced the Statesmen in Cleveland, Mississippi, on Feb. 4, and were handed a 58-72 loss, their worst conference loss of the season.

The Blazers offense was uncharacteristically stagnant, and for the first time in gulf South competition, Jeremiah Hill failed to score double digits.

Hill is averaging 19.1 points per game, which is five points more than the next highest scorer on the team.

Hill said the team was too overconfident when playing against Delta State. He said the team has to focus when going into the next games.

“We felt like we were better than everybody, so we didn’t pay attention as much,” Hill said.

Forward Saadiq Muhammad and Hill both agree their environment is not a factor when talking wins and losses.

“We’ve just got to prepare and play harder,” Muhammad said. “We’re all grown men and we’ve got to be able to play in any environment.”

The environment will loom large as the GSC tournament begins on Feb. 28, and the Blazers currently have a shot at the Division II National Tournament.

Muhammad said that statistic-wise, the team needs to improve free throw shooting, bring defensive field-goal percentage down and turn the ball over less.

Against Delta, the Blazers only shot 7-18 from the free throw line and allowed the Statesmen to shoot nearly 50 percent from the field.

Last week, Jeremiah Hill won player of the week, but he said he doesn’t really look for individual awards. He is looking at the bigger picture.

VSU still currently leads the Gulf South Conference in scoring, rebounds and field goals. Union doesn’t lead any offensive categories but the Blazers are not taking any game lightly.

The Blazers were the first team to clinch a postseason spot along with Alabama Huntsville. The two teams are currently first and second in the GSC. The matchup with Union and Christian Brothers will largely shape the Blazers road matchup with the Chargers on Feb. 16.

The Blazers play against Union this Thursday at 8 p.m. at The Complex and against Christian Brothers on Saturday at 4 p.m.