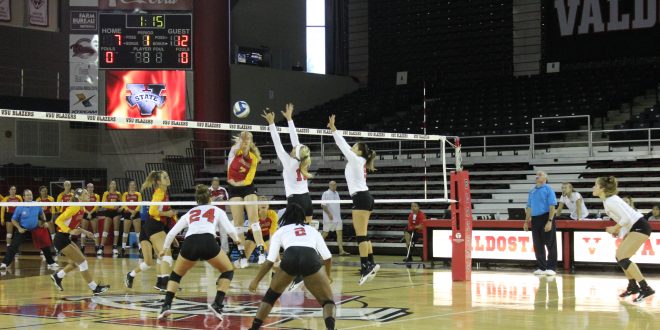 Volley ball is No. 7 in the Gulf South Conference currently. They were predicted to finish fourth overall.

VSU Volleyball took a step back with a 3-0 non-conference loss against Flagler College. The deck was stacked against VSU from the start.

Starting middle blocker Kayla Windera sat out due to an ankle injury, and middle blocker Lindsey Robinson played with a broken finger. Each set of the game was a tight one. Even against the odds, Blazers fought hard right out of the gate.

VSU struggled in the opening set and fell by a score of 17-25 against the Saints. With each set, the Blazers became more comfortable, closing the gap between the two teams. Still, the second set ended with the score of 20-25, giving Flagler another win.

Tristyn Sells tried to atone for the injuries to her teammates. She displayed why she was selected a preseason Blazer of the Year in the third set.

“I definitely feel like I tried to step up for my team and get them fired up,” Sells said.

In the third set, Sells had 11 kills, but it still wasn’t enough for the Blazers to come out with the win. The set ended with a score of 25-21 which gave Flagler the win and ended the match.

“I definitely feel like as a team, they didn’t play up to their full potential,” Mike Swan, head coach, said. “They weren’t all the way focused which hurt us in the end.”

However, there is still a lot of season to be played, and the players are confident in their abilities.

“I think the goal for the next game is to try to play to our full potential and come out with a win,” Dariah Powell said.

It was a tough lost for the Blazers, but they plan to bounce back with the game Friday night against Auburn-Montgomery at the P.E. Complex at 7 p.m.