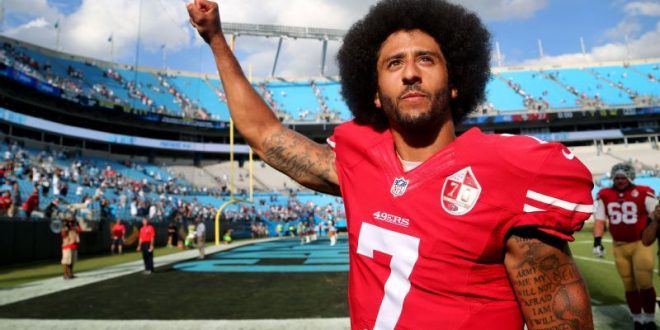 Collin Kaepernick is no longer employed by the NFL but the movement he started still is making ripples across the league.

What’s Your Take: Kaepernick’s imprint still in the NFL

His explanation was that he would not stand for a country that oppresses people of color. Kaepernick was named National Football League Players Association Community MVP after donating $900,000 to various charities.

This past weekend, President Donald Trump told Americans to not watch NFL games and said any player who kneels during the national anthem should be “fired” from their team while referring to the protesting players as “sons of bitches.” The league acted accordingly.

The Pittsburgh Steelers decided to stay in the locker room during the national anthem, except for former Army Ranger Alejandro Villanueva, ahead of their game against the Chicago Bears. The Oakland Raiders locked arms and sat during the playing of the anthem. Many other teams followed suit, and even the team owners participated in their team’s protest.

When these players kneel and exercise their first amendment right, it causes an uproar. It is portrayed as disrespecting the American flag.

In reality, these demonstrations have nothing to do with the flag. This is directed at people of color being profiled, oppressed and targeted by the community and police. MappingPoliceViolence.org found that 37 percent of unarmed people who are murdered by police are black. Note that blacks only make up 13 percent of the United States population. We have a president who has divided this country more than it already is.

Referring to protesters who are fighting for minority rights as “sons of bitches” is only making matters worse. Think about it. He called the Charlottesville protesters “very fine people” after they went beyond their First Amendment rights by inciting violence.

You must make people uncomfortable to get change. As Mexican revolution leader, Emiliano Zapata said, “It is better to die on your feet, than live on your knees.” No pun intended.

I get tired of people turning their head away from the everyday problems people of color face. They are perceived as a threat.

Shannon Sharpe of FS1’s “Undisputed” expressed his support of the protests on his Facebook page stating, “We ask players to sell a car and sneakers, but when they bring up social activism, we want them to just play sports.”

Funny how the majority gets so fed up about taking a knee during the national anthem but looks away when police are brutalizing people of color. Kaepernick starting the trend of kneeling during the national anthem, will propel us towards change because this shows that minorities will not accept it when the majority tells us to “just get over it.” As Malcolm X said, “If you don’t stand for nothing, you will fall for anything.”