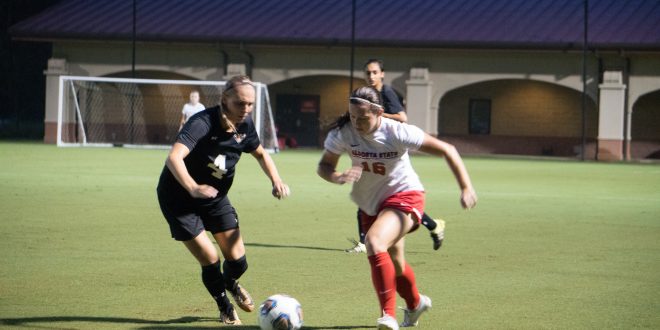 Ashley Lewis is tied for second in the Gulf South Conference with 8 goals.

If there’s one thing Ashley Lewis knows how to do on a soccer field, it’s put the ball in the net.

Lewis, a sophomore forward on the up-and-coming 2017 Blazers squad, did it 95 times during her outstanding high school career and hasn’t wavered since arriving at VSU.

Lewis, who turned 20 on Oct. 3, was born in Lawrenceville, Georgia, where she attended Mountain View High School. She was a four-year All-Region player for the Mountain View Bears. As a junior and senior, she earned All-Conference honors.

Lewis is, simply stated, a magnet to the goal. Her prolific goal scoring in her high school career led to a position on the Georgia ‘97 Olympic Development Team, where she helped her team secure the Region III championship at the ODP region camp.

After high school, she decided to attend Armstrong Atlantic State University, where she played in all 21 matches her freshman year, making six starts for the Pirates. Lewis tallied five goals and two assists for 12 points. She took 39 shots with 16 being on goal.

One of the highlights of her time at Armstrong Atlantic was on Nov. 11 of last year, when she notched a goal in the Pirates’ 3-2 victory over Lenoir-Rhyne in the NCAA Southeast Regional First Round.

Her first career goal at Armstrong Atlantic foreshadowed her future. It came against the VSU Blazers.

While at Armstrong Atlantic, Lewis played alongside Taylor Snell, who is now junior left forward for the Blazers, making these two teammates again, here in Valdosta.

Another Blazer team member, Phoebe Palmer, played against Lewis and Snell in the Peach Belt Conference when Palmer was at the University of North Georgia.

“Ashley made an impact at Armstrong,” Taylor said. “She’s an ecstatic, but laid back player.”

Lewis transferred from Armstrong Atlantic after her freshman year, mainly to reunite with VSU Head Woman’s Soccer Coach Stephen Andrew, who had coached Lewis at Dacula Soccer Club while she was still in high school.

“He was basically the facilitator in me coming to VSU,” Lewis said.

Andrew said her talent did not dissipate.

“She’s a natural scorer with a knack for hitting open shots,” Andrew said.

Her best game at VSU, so far, came against Spring Hill College, where she scored four goals. In that game, she became the leading scorer in the Gulf South Conference.

Currently, she’s tied for second in the conference in goals with eight. She is trailing behind Snell, a junior from Peachtree City, Georgia.

One area where she has room for improvement is in setting up her teammates for goals. She currently has zero assists on the season.

In one word, she describes her performance so far as “improving.” Her statistics are not where she wants them to be.

Andrew sees his star forward as a positive influence.

“Ashley is changing the culture here day by day,” Andrew said. “When she works hard, it rubs off on the rest of the team.”