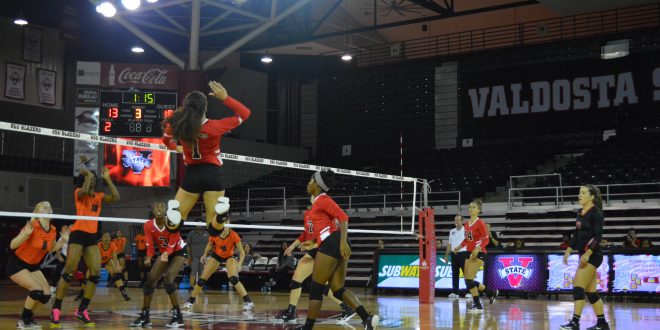 Blazer Volleyball is 9-7 overall and 4-3 in the Gulf South Conference.

Halfway through the 2017 Gulf South Conference volleyball season, the VSU Blazers have seen some success but still have considerable room to grow.

VSU’s volleyball squad currently holds a 9-7 overall record. In the GSC, the Blazers

are 4-3 and sit in eighth place, looking up.

On a positive note, the team has won two of its last three games.

The Blazers hosted the Auburn-Montgomery Warhawks on Sep. 29. The match ended with a 3-0 win for the Blazers, who were able to successfully protect home court. Tristyn Sells led the way with 13 kills and two blocks, followed by six kills and five aces from Chelsea Chavers.

The lone loss in the past three matches came to Christian Brothers on Oct. 6 by a score of three games to zero.

The team’s most recent game placed another W in the win column as they defeated the Union University Bulldogs three games to two. Katie McInnis came away with 11 kills, while Sara Dandridge notched 32 assists. Dandridge, a junior from Orange Park, Florida, is now fourth in the GSC in assists with 518.

One downside to the team’s performance thus far is their showing in road games. The team is 1-5 in away games, a fact that Head Volleyball Coach Mike Swan is very aware of.

”We just need to get off in our sets and apply pressure early (when the team is away from Valdosta),” Swan said. “So far this season, the team has lost the first set of the match 10 out of 16 times.

He also feels that the team misses valuable shots.

“Our team has lapses of unfocus,” Swan said.

On the bright side, Sells, a senior from Littleton, Colorado, was named Blazer of the Week, thanks to her versatile performance against Auburn-Montgomery.

Swan was elated to hear that one of his star players was recognized.

“She is a really tough offensive threat and very deserving of it,” Swan said.

Sells currently averages nearly three kills a game which leads the team. According to Swan, “she swings greatly” and is smart when doing so.

The Blazers have 717 kills so far on the season which places them seventh amongst GSC teams.

“We need to continue closing out sets,” Swan said.

The team will compete next at the GSC/SSC Regional Crossover Tournament in Birmingham, Alabama. The Blazers first opponent will be the Tampa Spartans on Friday, Oct. 13 at 8 p.m.