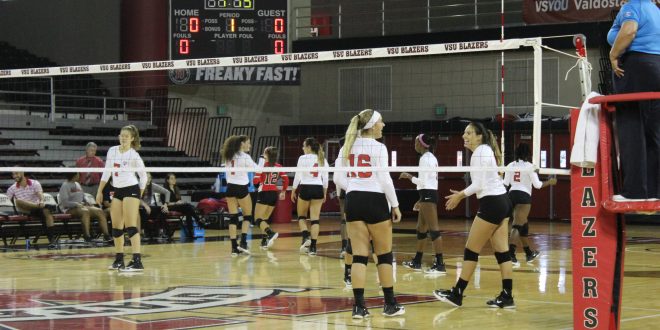 Volleyball has to play with their backs against the wall in the latter part of the season.

The Blazers volleyball team is in the midst of its stretch run, and they will need to be close to perfect in the final four conference contests to have any chance of making the playoffs.

The season to this point has been less than stellar. Through October, they have compiled a 10-15 overall record. They stand at 5-8 in the Gulf South Conference, placing them in the ninth slot.

On the road, the Blazers have been struggling with a 1-7 record. With their poor road record, it may be very treacherous for the team going forward.

They have five games left in the season, and four of them are against conference opponents.

In the GSC conference tournament, the top six teams qualify and get a shot at the title.

Kayla Widera, a 6’1” sophomore from Trinity, Florida, has been playing well this season. She is fourth in the conference in blocks and seventh in hitting percentage. She has 93 kills in her 237 total hit attempts.

Sydney Chick has excelled for the team at libero, and currently sits at second in the GSC in digs. Digs are volleyballs saved from hitting the ground, Chick’s specialty.

Another player that is on the conference leaderboard is Sara Dandridge, a junior from Orange Park, Florida.

Dandridge is fourth in assists in the conference and has been a presence on the court.

Tristyn Sells is leading the team in kills with 247 and averages 2.78 kills a set. In 2016, Sells had 225 kills for the season. This year, she could improve upon that number immensely, with five games left.

The Blazers needs to gain some momentum in the final portion of the schedule. The teams that VSU are chasing have been winning recently, so the Blazers are going to have to move up the ladder on their own.

All of the conference games VSU has left are very close to a must-win game. The Blazers have a non-conference game on Friday, Nov. 3, at Spring Hill.

Then their final series of exams begins, starting with a critical match-up on Saturday, Nov. 4, against the Auburn-Montgomery Warhawks in Montgomery, Alabama.