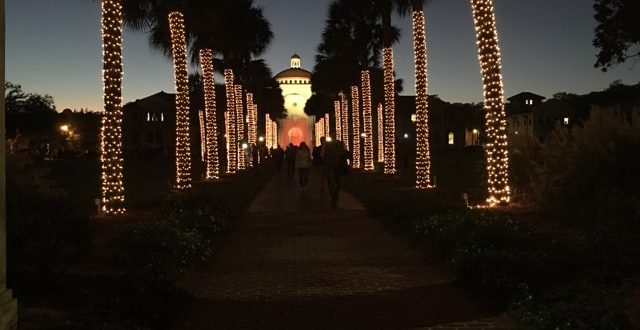 On Tuesday Nov.28, VSU hosted the lightening of palms with president Richard Carvajal. This event included a number of activities to participate in. This was an event for not only students to enjoy, but something that the community could enjoy as well.

The lightening of palms is an event that VSU host every year around the holidays. In the past, the palm trees along the center of main campus in front of West Hall were lit around the holiday season for the Valdosta State campus and the Valdosta community to enjoy. A new tradition began in 2014 when VSU decided to put on a festive event which would include the lightening of palms along with refreshments, singing, and other activities.

This year Santa Blaze attended for enjoyment and pictures with the children and students present. The VSU spot lighters were there performing popular Christmas carols. Greek life hosted cookie decorating, ornament decorating, and were also collecting toys for the Children’s Advocacy Center of Lowndes County Inc. There was also a station to write cards for the troops.

As the sun began to set and the moon began to come out, a countdown began. Once the count hit one, all the palm trees in front of campus were sparkling with lights, lightning up the whole front lawn. It was a memorable moment. The crowd was amazed, and kept a smile on the little kids faces. Everyone were taking pictures of the lights.

According to Executive administrative specialist Malinda Brown Cutchens, The crowd this year was the largest in the history of the Lighting of the Palms. The event was a successful one. The tradition here at VSU is one to keep and hold on to. It was a good way to get not only students to participate, but also the community involved too.

Previous People poll: How do you deal with stress?
Next Fashion trends on campus