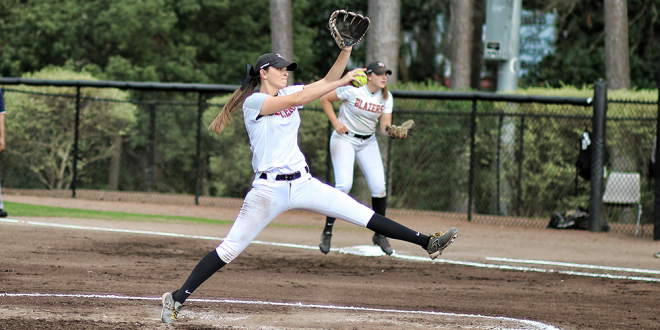 Kassie Johnson threw the first no hitter for VSU Softball since March 15, 2016.

Kasie Johnson’s stunning 3-0 no-hitter was the highlight of a Blazers series victory over Delta State University, and enough to earn the junior from Patterson, Georgia, Gulf South Conference Pitcher of the Week.

Johnson lowered her ERA to 1.12 in the Blazers’ first no-hitter of the season on Feb. 24.

The no-no was the middle game of a 2-1 series win for the Blazers, raising the team’s record for the season to 14-4.

Game two was electric from the jump. Johnson absolutely demolished DSU’s lineup from the beginning and never stopped.

Johnson’s seven-inning outing was radiating pure dominance from the circle when she was in it.

Johnson had three strikeouts for the game. She pounded the strike zone and let the Statesman put the ball in play. The Blazers’ defense backed her up.

“I felt great after the no-hitter,” Johnson said. “We played as a team the whole game, and my defense had my back the whole game. It gave me all the confidence I needed.”

The last Blazer no-hitter was thrown by Caitlyn Calhoun against Florida Southern on March 15, 2016.

“We have played better today,” Head Coach Thomas Macera said. “We hit enough today and had a few mistakes, but when you have a no-hitter being thrown, it’s pretty easy to win.”

In the top of the seventh, Taylor Hartenbach made a tremendous diving play in centerfield to save the no hitter.

“When Taylor came up with the ball she dove for, I wanted to go hug her right then and there,” Johnson said. “Knowing that she laid it all on the line for me made me feel even better about the game, and I knew she had my back like the rest of the girls.”

Game one of the weekend series with the Statesman was a Blazer victory of 6-5.

The pitcher for the  Blazers, Kathryn Carter, Avery Lamb and Kameron Coggins did well. The five runs allowed were unearned because the defense had four errors in the game.

DSU tied the game up with a five spot in the top of the fifth.

The game was tied after seven innings. The eighth inning started off with catcher Lacey Crandall, who singled to left field. Then, leftfielder Brandy Morgan walked, giving the Blazer’s runners on first and second.

Second baseman Danielle Patterson stepped into the box and put the ball in play. The ball found the hole in the second baseman’s mitt and continued into right field. Crandall scored easily from second, and Patterson was the hero.

In the third game, Johnson started again, but didn’t have the same stuff. She threw very well. Only two runs were given up and only one was earned by the Statesmen.

The Blazers bats didn’t show up in the third game. DSU starter Taylor Johnson held the Blazers to two hits and zero runs.

The Blazers also only struck out two times which means they were putting the ball in play, but nothing fell.

The final score of game three was 2-0.

The series win pushed the Blazers to 4-2 against conference opponents.

“The first two games were the best we’ve played so far this season, but we still have a lot of work to do,” Macera said.

Previous Blazers better equipped for postseason this go round
Next What’s Your Take: NCAA scandals push conversation over compensation