Home / Campus Life / Get to know the Anime and Manga club 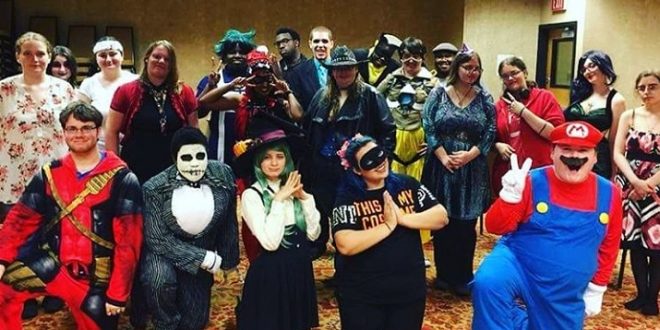 Photo of the members of the Anime and Manga Club.

Get to know the Anime and Manga club

At VSU there are over 200 student organizations, but one students may not know of is the Anime and Manga Club. This is a group for like-minded people who enjoy discussing anything having to do with Japanese art and animations. If you are someone that likes anime, this organization is a great place to go because of the chance to socialize with people who share the same interests. You can exchange shows, mangas or event dates like anime conventions.

The Anime and Manga club is a fairly large club, boasting 58 members with an average meeting turn out of at least 15 to 30 people.

The clubs president, Kateri Eichler, has been a part of the organization since she first came to VSU.

“I joined the Anime & Manga club in my very first semester of college in fall 2016,” she said. “I was elected the public relations officer that same semester, and in spring of 2017, I was elected president.”

At most meetings, the club focuses on playing group games that are related to anime, but they will also discuss upcoming events such as Tiger Con, an anime, manga, comics and gaming convention coming to Valdosta on April 14 to the 15 this year. The Anime and Manga club are an official host of Tiger Con, and the VSU shuttles will be going back and forth between the convention center and VSU bus stops. They also host a yearly Halloween ball where they play music, games, eat food, and in general have a fun time with costumes.

“Sometimes we have special presentations on specific topics like newly released anime or manga, cosplay tips and tricks and other fun geeky stuff,” Eichler said. “We also host screenings where we choose a theme and show anime that follow that theme.”

Not only is there a chance to exchange shows and manga at the meetings, members will often bring new or interesting games for the others to see before they buy it. Games that they play in the club are usually fighting games such as Super Smash Bros and Mortal Kombat.

One of Eichler’s most memorable moments in the club was when she was elected as the PR officer as a new member.

“One moment I remember quite clearly was the meeting where I was elected as the PR officer,” she said. “Everyone in the club had just introduced themselves, and the president at that time asked if anyone had leadership experience and/or was well versed on social media and wanted the job. Despite being a brand-new freshman, I stood up and volunteered. I ran unopposed and was elected, and I remember thinking, ‘What did I just get myself into?’ In the end, I feel like I made a very good decision on that day because I absolutely love what I do now.”

Sometimes the hardest part about recruiting new members is that students simply don’t know the club even exists, but that doesn’t stop the club from having a good number of members.

“Our club is doing well, but we are always looking for new members,” Eichler said. “We do our best to get the word out, and sometimes members just find us.”

The club participates in the Happening every year and it is how they receive most of their recruits. It’s how Eichler found out about the club.

“I found out about the Anime & Manga club by meeting some of the officers out on the front lawn one day,” she said. “I commented that I liked one of their shirts (which was anime related), and they proceeded to tell me about the club and when the next meeting was. I knew at that moment that I wanted to be a part of the club.”

Eichler shared her favorite character to cosplay as, but she also likes to cosplay a variety of other characters from various animes, movies and games.

“My personal favorite cosplay that I have done is a Pokémon called Sylveon, which is the fairy type evolution of Eevee,” Eichler said.

Meeting times for the club are at 7 p.m. every other Tuesday in the Student Union’s Meeting Room 1A, and on the off weeks they meet for Friday screenings of anime or shows.

Previous Opinion: The highlights from the Oscars
Next Editorial: Student input on commencement a must