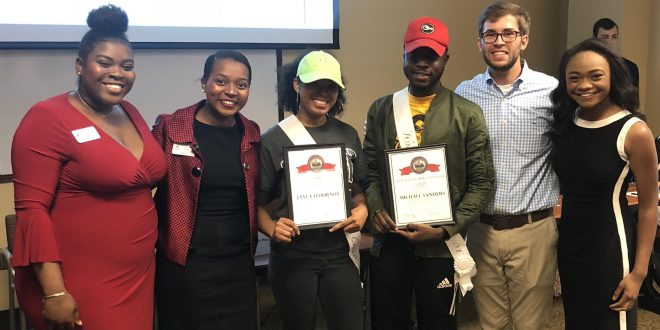 On Monday, April 22, SGA began its meeting with Former President Maya Mapp’s state of the association address. The speech was about two minutes long, but she first thanked the entire SGA for their hard work on and off campus.

“I have had the pleasure of serving at this position for two years, and to see SGA go from night and day, is absolutely amazing,” Mapp said. “I would like to thank all of you for allowing me to be a part of your lives as a representative of this institution and of the student body.”

Mapp, who graduates May 5, described this year of SGA as “transformative, futuristic and lovable.” According to Mapp, at the beginning of the 2017-2018 academic year, there were 12 members of the Senate. Through SGA’s recruitment, the membership tripled.

“We made it our mission to ensure that each member of our organization understood their roles and the various interactions both as a whole and in private,” Mapp said. “We gave the student body efficient, dedicated and determined senators.”

Following the address, Mapp announced that her last duty as SGA president and representative of VSU is to accept the William Potts award. The award is given to one SGA president in the state of Georgia.

She specially thanked Vice President Aisha Johnson, Secretary Sylandi Brown and Comptroller Matthew Rowe, who are members of the current SGA executive board. The meeting was the last time the current executive board will serve before SGA.

Moving into the middle of the meeting, Comptroller Matthew Rowe then presented his report which imposed five unanimous Blazer Allocation Fund approvals. Requested funds varied from $300 to $500 of which the senate voted in favor of granting.

According to Rowe, SGA granted about $8,000 this year to students and organizations.

The meeting shifted to SGA’s Resolution 18-09 which was authored by, at the time, Speaker Jacob Bell and sponsored by 12 senators. The resolution addressed the requirements, selection and role of the homecoming king and queen.

Bell and Brown presented the resolution to the Senate and current Homecoming King Mickey Sanders and Queen Jay’la Flournoy.

“This is going to offer the homecoming king and queen an opportunity to receive support in executing their platform,” Bell said.

According to the proposed resolution, there have been many calls in recent years to amend the eligibility requirements, selection process and post-selection responsibilities of the homecoming king and queen.

The resolution states that if resolved, the eligibility requirements should include:

* Enrolled as a full-time student for fall semester

* The endorsement of an active student organization in good standing with the VSU Student Life office.

Upon the finalizing of the documentation, the resolution will be sent to the current VSU Director of Student Life, Robin Vickery, for consideration. All members of the Senate approved.

Previous Undergrad Research Symposium takes over VSU
Next Opinion: The U.S. must consider options in Syria