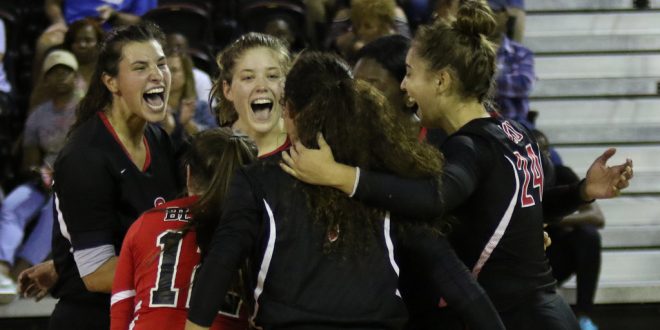 VSU Volleyball opens their season at a tournament in Daytona Beach Friday and Saturday.

This summer, VSU Volleyball saw a new head coach arrive on the scene and take charge. Head Coach Kaleigh Zoucha (pronounced “ZOO – Ha”), a former player and assistant coach at University of Nebraska Kearny, has the experience and ability needed to lead the Lady Blazers to success in her first year at the position.

After stepping into the role, Zoucha created a new playbook for the players to adapt to for the upcoming season.

During the VSU Volleyball Meet the Blazers event, Zoucha said, “The biggest thing we’ve been trying to do is just try to problem solve. What’s the best way to go about merging my coaching with their skills?”

With the season opening tournament in Daytona Beach approaching, Zoucha and the team have been putting in the reps and preparing for the tests ahead.

Zoucha has had to adjust to a new city just as she did with her new team.

“I think that it’s a town that is a great community who supports the college, and that’s ultimately what I wanted,” Zoucha said.

Success is not a stranger to Zoucha, and as she steps into her first head coach position her experience and skills will help her fill the shoes. The Lady Blazers were polled eighth in the Gulf South Conference pre-season rankings, but Veteran Player Chelsea Chavers shared her thoughts on the rankings with a positive attitude.

“I actually think that we are going to be a surprise,” Chavers, a senior in her fourth year, said. “A lot of people are going to be judging us off of last year, and last year we were okay, but I don’t know – we weren’t the best. I think this year we will be going in there attacking it and surprise people and be great.”

She also spoke of her individual and team efforts for the season.

“I’m just trying to contribute to the team as much as I can, and then as a team I want us to have the unity,” Chavers said. “That’s all you can really ask for, and we just got to get out there, do our best and hopefully have results.”

The Lady Blazers have the experience and the skills to surprise the conference this year, and in her first season, Coach Zoucha has a lot of new territory to cover, but the leadership skills to push the team to greatness.