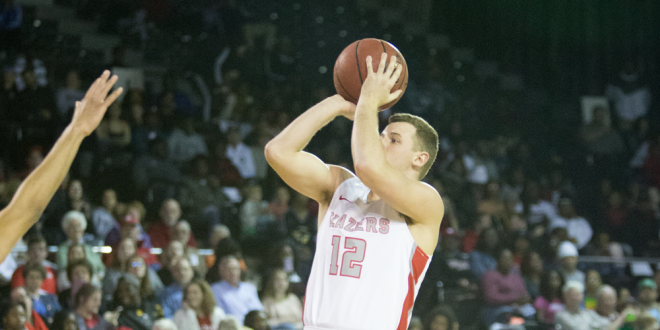 The Blazers will play Florida State in an exhibition on Nov. 1.

The best team in the GSC last year is not taking a backseat to any team in the GSC, rather they are switching to the driver’s seat to start this season.

After a stellar overall record of 26-5 on the season and an 18-2 record in GSC play, the Valdosta State men’s basketball team was picked to be the last team standing in the GSC, after the league offices released the GSC Preseason Men’s Basketball Poll on Thursday.

As voted on by the league’s coaches, The Blazers led the poll in votes with 143 total points and 11 of 13 first-place votes. West Florida, VSU’s rival, followed in second with 118 points, while Delta State was third with 114 points and one nod for a first-place vote.

Coaches were not able to vote for their own teams in the poll. VSU senior and All-American guard Beau Justice was named to the Preseason All-GSC Team as he elevated his level of play, solidifying himself as one of the top basketball players in the country. He averaged 20 points per game on 47 percent field goal shooting, serving as the viable No. 1 option for the Blazers.

Over the last two years, Justice has helped lead the Blazers to a 37-5 record in conference play and became just the third player in VSU history to eclipse 1,000 career points in two seasons or less, placing him in elite company with Tyrone Curnell and all-time scoring leader and Blazer Athletics Hall of Famer Eddie Brown.

Justice racked up a boatload of accolades last season, as he was named GSC Player of the Year, D2CCA South Region Player of the Year and named National Association of Basketball Coaches (NABC) Division II All-America.

All five players are seniors and three are repeat first team All-GSC selections.

In the backcourt with Justice is VSU senior Winston Morgan. Morgan found himself in the company of his own, becoming the first player in VSU history to eclipse of the century mark for three-pointers scored in a season, ending the year with 106. Justice was only 12 three-pointers shy of becoming the second.

As a unit, the Blazers shot 39 percent from beyond the arc last season. Losing four players due to graduation at last season’s end, more shooting should be on the way as three of the four were big men. Rebounding is anticipated to be a struggle for the Blazers this season.

The Blazers ranked No. 2 in rebounds per game with 40, with former-VSU forwards KJ James and Jimmy Kodet leading the way with 7 and 6.4 rebounds per contest, respectively.

VSU welcomes two newcomers Desmond ReRamus and Keshawn Ingram, as they were named Top Newcomers for 2018-19. DeRamus is a senior transfer from Auburn Montgomery and Ingram came to VSU from Eckerd College, who also is a senior.

Mike Helfer enters his fourteenth season as the Blazers head coach. Last season, he guided his team to the top seed in the GSC and a berth in the Divison 2 NCAA tourney. The Blazers were defeated in an upset loss to Eckerd College in the first round, an early exit to the end of a Cinderella season.

Previous “Bear Trap” gets best of Blazers, finish 16th at PGA National
Next Lady Blazers open season at No. 2