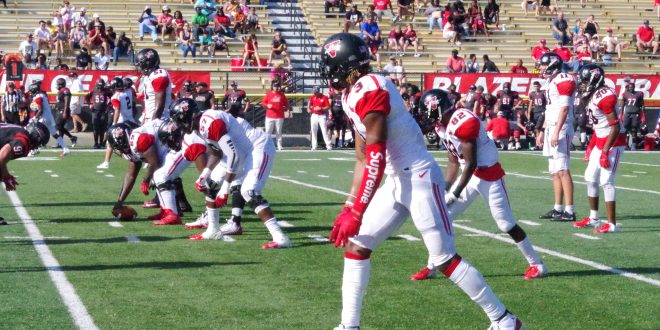 The Blazers will not be in action this weekend due to a bye week. They will resume play Nov. 3 against West Florida at 5 p.m.

This season, the undefeated Blazer football team has racked up a boatload of accolades and individual honors. Now, they sit second in the initial NCAA Division II Super Region Two rankings, released Monday afternoon by the NCAA.  The West Georgia Wildcats lead the first of three public rankings.

Although the Blazers are unblemished on the season, West Georgia is posting an 8-0 record. VSU and West Georgia hold firm command of the Gulf South Conference, sitting at first and second respectively in the recent standings.

Below is the full list of the South Region Two Rankings:

The NCAA will have two more public rankings each of the next two Monday’s, prior to the NCAA Division II Football Selection Show scheduled for Sunday evening of Nov. 11, broadcasted on NCAA.com.

Unfortunately for the Blazers, if the season ended today, West Georgia would get the first round bye and await the winner of the Florida Tech vs. Bowie State game. The Blazers would host a first round game against Morehouse and Lenoir-Rhyne would host Carson-Newman in the 3/6 matchup.

The NCAA playoffs will begin Nov. 17 with the 2018 NCAA Division II National Championship scheduled for Dec. 15, 2018, at McKinney ISD Stadium in McKinney, Texas.

The top seven spots didn’t change from last week as Minnesota State holds the top spot again this week in the rankings.

Two teams moved up in the rankings as Tarleton State moved from ninth to eighth and Grand Valley State, who was eighth, moved to ninth.  Midwestern State remains at 10th. The rest of the rankings from 11-18 also remained the same.

West Florida dropped out of the poll after a lost at home to Florida Tech. Ohio Dominican followed suit, but Lenoir-Rhyne and Hillsdale moved into the poll at No. 24 and 25, respectively.

The Blazers remain in the positive this week after the 44-21 win over North Greenville on Saturday for Homecoming. VSU gets back on the road in a key game at West Florida on Nov. 3 as it will be the first of two games the Blazers will be part of the GSC Game of the Week on ESPN3 and the Watch ESPN App.

The 2018 regular season finale is the final Game of the Week for the GSC as West Georgia visits VSU on Nov. 10 at 7 p.m. at Bazemore-Hyder Stadium.

Previous No. 1 Barry dominate, No. 22 VSU still has work to do
Next A ‘plus-sized’ opening: Perfectly Priscilla settles in Valdosta