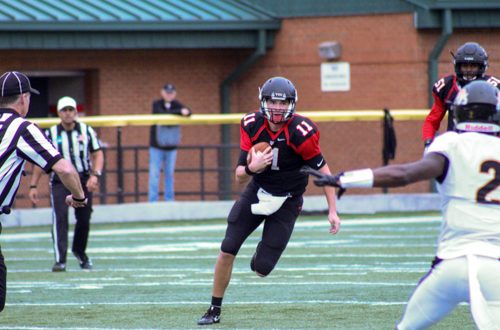 VSU sophomore quarterback Rogan Wells has put together a historic season for the undefeated Blazers, and he could top it off with an illustrious trophy.

Wells was named one of nine finalists for the 2018 Harlon Hill Trophy as the NCAA Division II College Football Player of the Year, announced Wednesday Nov 18, by the Great American Conference.

The award is widely regarded as the “Heisman Trophy of Division II.”

Wells, if the winner, will be in good company as he would become the third Blazer to win the prestigious award as former Blazer Dusty Bonner won the award in 2000 and 2001, while Chris Hatcher won it in 1994.

Since the trophy’s inception in 1986, a total of 16 quarterbacks have won the award.

Sports information directors of the 166 NCAA Division II football-playing institutions nominate and vote on the trophy.  The primary nominations were 37 from across the country and nine from Super Region Two.

Along with Wells, the finalists include Jaleel McLaughlin (RB) of Notre Dame College (Ohio) and Chance Stewart (QB) of Hillsdale (Mich.) out of Super Region One.  Hall from Super Region Two, and there are three finalists from Super Region Three with Jayru Campbell (QB) of Ferris State (Mich.), Ka’Ronce Higgins (WR) of Southern Arkansas and Braxton Marshall (QB) of Emporia State (Kan.), due to a tie in voting.  Super Region Four has Markus Jones (DE) from Angelo State (Texas) and Gabriel Watson (RB) of Sioux Falls (S.D.).

Three of the finalists, including Wells, all are competing in this weekend’s quarterfinal round matchup (McLaughlin, Campbell).

Wells has had an outstanding sophomore campaign for the 11-0 Blazers as the team prepares for the NCAA Quarterfinal Saturday at 1 p.m. at Bazemore-Hyder Stadium against No. 3-seed Lenoir-Rhyne.

He has started all 11 games for the No. 3-ranked Blazers this season and is part of the nation’s leading scoring offense at 53.5 points per game.