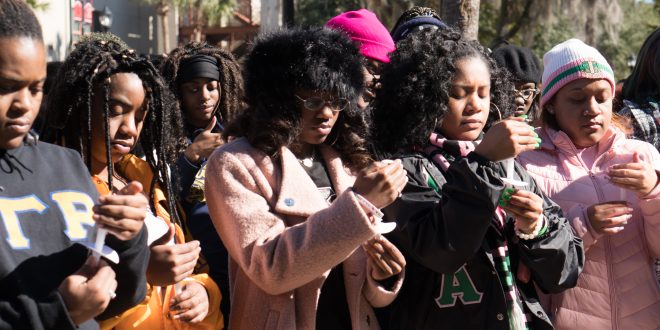 Students stand together with candles lit in remembrance of Martin Luther King Jr.

In 1963, Dr. Martin Luther King Jr. said “I have a dream,” and on Jan. 21 that dream was realized sevenfold with the seventh Annual MLK Day March.

It saw a count of at least 230 students, faculty, staff and community members overall attend much to Dakota Headley’s, host and Mu Omicron chapter secretary, consummation.

“I expected a pretty good turnout for this, but just not quite as big as it did,” he said.

Headley said though it was unexpected, the march’s turnout was a testament to MLK’s crusade.

“Like Lauren said on-stage, Martin has always symbolized unity and a sense of togetherness for us black people,” he said. “I believe as students and young folks coming together on campus to do things like this, it just shows what we really care about as far as civil rights go.”

The march’s route usually goes from the Valdosta State University Center to the Student Union by way of West Brookwood Dr., N. Oak St. and the Student Union’s driveway. This year was different.

Instead of going up the student Union’s driveway, the march went up N. Oak St., entering Langdale’s driveway and walking down the pedestrian mall until arriving at the Student Union steps.

The march ended with a candle-light vigil and a moment of silence with a slight switch-up. Instead of dissipating, the march’s participants enjoyed a brunch afterwards, a benefit of the newfound school partnership.

Office of Student Diversity and Inclusion Director Sandra Jones said the partnership was only a matter of time.

“[The department] is not here to do something that’s going to conflict with what’s going on,” she said. “We want to support students, so it made sense to join them.” 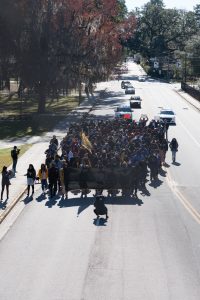 With a sponsored brunch also came speaker and Chairman of the Lowndes County Democratic Party Gerone Anderson. His message: Learn from the past to ensure our future.

“Our past is coming back to the future,” Anderson said. “The things that are happening now happened a long time ago, but Dr. King handled it a different way.”

Anderson said the younger generation should look to the older generation to ascertain solutions. As for “Dr. King’s different way,” Anderson meant that not everything can be done alone, especially not bringing about equality.

“We have to be ready as a race [but] we can’t just do everything as blacks only,” he said. “Even in the struggle back in the days of the Underground Railroad, white people helped a lot of blacks back then. It just wasn’t about blacks back then [so] it can’t just be about blacks now. Dr. King worked for everybody’s race not just blacks.”

VSU NAACP President D’Layna Jonas said the NAACP and Mu Omicron’s decision to bring in the Office of Student Diversity and Inclusion was more than just sponsorship, but a beacon to students of all backgrounds.

Jonas said she wanted to make sure students knew the march isn’t just for minorities, but a call to action for all. She said she was glad to see such a large and diverse crowd attend.

“Just to see how many people came out in the cold, it shows that they believe,” she said.

Graduate student Walker Lee—a non-black student—said he resonated with that message and that he came out in support of his fellow students and community.

“I wanted to show that there are people out there that are going to be supportive,” Lee said.

This was Lee’s first time attending the MLK Day march and from it, he said he felt the heart of the community.

“I got a message of love and support that no matter what is going on in our country or our school, we can all come together as a community, as a school, as a nation and just fight for equality for everybody,” he said. “Or just tiny things that we can do to change.”

Martin Luther King Jr. Day is an annual holiday celebrating MLK’s birthday and legacy. The VSU NAACP and the Mu Omicron Chapter of Alpha Phi Alpha Fraternity, Inc. has hosted a march on the day of since 2012.