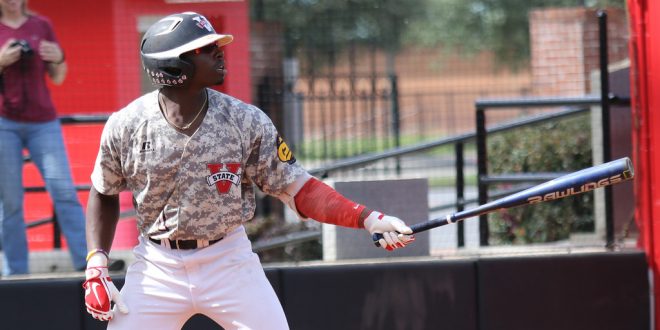 Blazer baseball will have their first home game against Flagler College on Feb. 5 at 5 p.m.

Getting off on the right foot was the mantra for this season.

Head coach Greg Guilliams is confident that the team has a passion and hunger for the coming season and hopes people will see that at the games. Starting the year 3-0 is the start they hoped for.

“I think we have some pretty good senior leadership and I think our guys are pretty hungry,” Guilliams said. “So, hopefully when people come out to games, they will see that passion and excitement that our players have.”

Losing 14 seniors to graduation is a huge amount, but Guilliams set his sights on getting the guys prepared.

The team has been practicing since fall and looking to increase the pressure this season.

“I think our team this year has done a good job of buying into what we want to do,” he said. “I think our team cohesiveness up to this point has been really good. I don’t know if we necessarily do anything different than anybody else. You just hope you do it a little better.

“At the end of the day, I think you really get a feel for your club when you start playing games because in the fall and leading up to your games, everybody practices, everybody plays, but when you start playing other teams, you can only play nine guys at a time. So, if you have 30 guys on a team, nine are playing, do guys accept their roles? Are they team players? That’s when you really find out.”

Up until the season starter, the team has had some basic practices, but that will most likely change as time goes on.

“Guys will come out early or on their own if they want to get some extra batting practice in,” Guilliams said. “The guys always like to hit. After that, we will stretch out. The pitchers have their own routine. The position guys have theirs. We usually do some type of base running for about 10-15 minutes, throw and then get into the practice.

“Each practice, there is usually a 20-minute portion of it where the guys work out individually at their positions and then another 20-25 minutes we do something as a team. Then, we usually take team batting practice or intersquad depending on where we are at. Once we start playing games, we usually don’t intersquad because we are playing so many teams.”

The team ranked fifth in the Gulf South Conference, which was announced Jan. 23, but Coach Guilliams and the team have not had any conversations about it.

“Not one player has said to me, ‘How do you feel about us being fifth?’ because I think everybody understands that our football team was picked fifth this year,” Gulliams said.

Blazer baseball will have their first home game against Flagler College on Tuesday at 5 p.m.