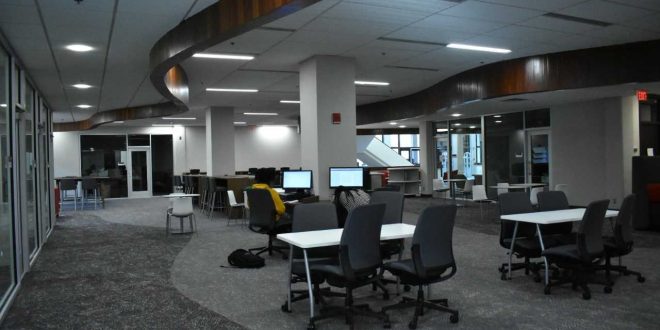 Students, staff and faculty received a tour and the chance to react to the recently finished library renovations on a guided tour or the new area.

Last semester, a portion of VSU’s Odum Library closed to students so renovations could be completed on half of the second floor.

Curiosity arose, and questions developed. Those encumbered asked, “Why did the renovation happen in the first place? Why was that specific location chosen? What effect does this change have on student life? Was it worth it?”

Dr. Alan Bernstein, dean of the library, answered these questions.

“For many, many years, the library has recognized the need for more collaborative spaces for group studying,” he said.

According to Bernstein, the library staff would anecdotally overhear students’ pleas for better group studying areas within the library. He said staff would try to appease them by rearranging furniture, as well as attempting to create quiet zones and active learning zones.

However, trial and error took place as they made a constant effort to provide comfortability for the students. Bernstein had something greater in mind, though. Something in need of support from higher administration.

“For the last six or seven years, I’ve wanted to get the Academic Support Center into the library,” he said.

This year, he got what he wanted.

The university made budget changes, one of which was taking place in the library. With that in mind, Bernstein put a package together coupling the ASC into the library. VSU approved and decided to renovate the front half of the second floor in regards to Bernstein’s plan.

The renovation brought in new technology, such as smart boards and updated furniture. It also created new study rooms for students with glass windows and comfortable seating for preferred collaborative learning.

One of the main reasons the ASC moved into the library was space.

The original location of the ASC, Langdale Residence Hall, didn’t seem practical, according to Bernstein. Often, students couldn’t clearly see where it was located, and it was immensely compact, not allowing for the space’s most functional use.

With numerous cons, it was clear to VSU that the library provided better functionality. Students appear to believe so, too.

“I come here for studying, and I probably wouldn’t have done it at the last place,” she said. “It’s a better environment. In the old building, I felt like some people would feel as though it’s like the walk of shame to have to go and get tutoring done.”

Jordan Gravett, a senior biology major, said the renovation has made things easier for her and others within her major.

“It’s a lot more active in here,” she said. “I would see people from my major [and] we can collaborate a bit more.”

Gravett is enjoying the update, especially the new technology and study rooms, and hopes there’s more is to come.

The overall reaction to the renovation has been positive, with students having great outlooks toward the space and other potential renovations. Though they are happy, students have requested to have another wing of study rooms added.

Senior Rachael Davis has made that request clear to Bernstein. She said that even with the recent addition, the study rooms are still hard to get into.

“They’re very competitive to get into, but they’re very nice and they’re definitely worth it,” she said.

In the past, students have expressed concerns of someone watching Netflix in a study room and taking up time that others could use to study. While Bernstein takes their concerns seriously, he also notes that the student may be watching a film for an assignment or have trouble learning in an environment surrounded by others.

“These are the challenges of determining whether to kick someone out,” Bernstein said. “What dictates whether something is appropriate or inappropriate?”

Bernstein said the library staff are taking a hands-off approach towards the beginning of the renovation to observe how things “play out and develop.”

As time progresses, the initial issues will begin to set in harmoniously, and future plans for how to better serve students will be determined through constant study of the area.