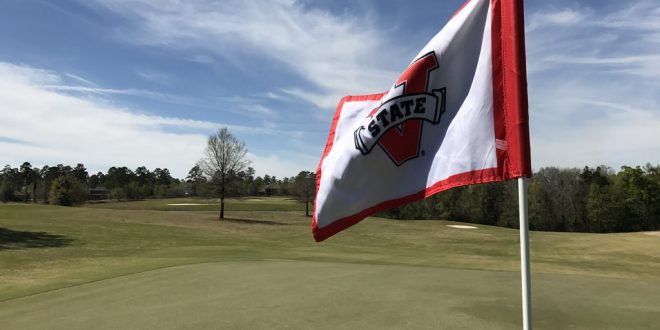 The Blazers came in 14th of 15 teams this week at the Bobcat Invitational, after posting the highest team total in Round 3, when their low man in Monday’s first two rounds withdrew a half an hour prior to his scheduled tee time.

“I withdrew due to a wrist injury,” Healy said.  “I went to bed with my wrist just a little weak and then woke up and couldn’t move it.”

Coming into Cuscowilla, Healy had been second only to Matt Anderson in terms of individual ranking on VSU’s team at No. 72 and had played himself into serious consideration for the Phil Mickelson Award, given annually to the nation’s top freshman.

“He’s obviously a great player, and you hate to see him have to sit out, but I or any of the other guys wouldn’t want him to make it worse by playing and risking not being able to play in the potential postseason,” Blazer teammate Gage Smith said.

A formal public announcement on the injury has not been made, but in this event, the team went 31 over-par on Monday with Healy, an average of 15.5 over per round, and 40 over-par on the same course without him in just the single round that took place on Tuesday.

Prior to the injury, Healy posted a team-low 1-under 69 in the opening round, making three birdies, including one on the drivable par 4 12th, to just two bogeys.

“I made a lot of birdies to cover for my bogeys, which was the goal,” Healy said.  “I knew if I made birdies early then I could hang in there.”

After seven bogeys in Round 2, three of them coming in his first four holes, two of them in a row on 17 and 18, and two more coming in his last three, the freshman sunk from a tie for 6th to a tie for 34th, although he still managed to be two shots ahead of Davis Smith, who posted the second best score for the Blazers in Day One at 7 over-par.

With Healy’s withdrawal essentially taking him off the individual leaderboard, Junior Jordan Long wound up posting the team’s lowest score, coming in a tie for 59th with rounds of 74, 77, and 79.

Starting on the back, Long played his first nine at 4 over, but with two birdies on 2 and 7, played the front at even par to finish at 4 over for his first 18.

In Round Two, he started the day at 3 over through two, 5 over for the side.  He faired better on the front once again, rebounding with birdies on 1, 2, and 4.

Unfortunately, Long made a bogey on the following hole and made back-to-back double- bogeys on 7 and 8 to finish at 11 over for the first day.

The veteran improved his place on the leaderboard Tuesday, however, by making six pars on his last seven holes to end the event.

For the first time this season, Matt Anderson did not end as the low Blazer, and in the final round, he failed to break 80 for the first time since his first round at the NSU Shark Invitational, played at PGA National in early October.

“Matt has been our top performer for two years and still is,” Coach Jared Purvis said.  “No golfer is ever looking for a poor performance, but it happens.  Tiger Woods and Jordan Spieth are great examples.”

On Tuesday, during the aforementioned final round, the Lakeland native had a particular stretch where he made a triple on 6 and then went bogey-bogey-double to finish the front.  On the back he settled down, following that up with six straight pars.

Tied with him for the tournament was Smith, who had matched his score at Copperhead some five months ago.

The high point for Gage may have been his opening round 75 from a broad point of view, but breaking it down more, Hole 4 may have treated him best, with the lefty going 2 under in the three rounds there.

On Tuesday, he sank a 35-foot left-to-righter that broke a solid two feet.

On the next hole, Smith hit a 3-iron off the tee and struck a pitching wedge close for another birdie.

Apart from Healy, nobody played better on Day One than Davis Smith, whose rounds of 73 and 74 put him in a tie for 49th.

In the second round, the Dalton, Georgia product, who started on 10, was 5 over through seven holes and 6 over on the back nine, before he “made some good birdies down the stretch.”

In the 37 degrees and windy conditions, he struggled in Round Three, making eight bogeys, two doubles, and a triple on 12, with only one birdie to minimize the damage.  All in all, he hit 10 more shots in Round Three than in Round Two.

No. 2 Lynn won the event at 14 over as a team, the third of the year for the Fighting Knights, with the others being the Otter Invitational ending on October 23rd and the Matlock Invitational, which ended on February 12th.

The Barry Buccaneers came in 3rd, notable because it marked the first time in 2018-19 that they had not come in first or second.

With the new GolfStat Rankings released Wednesday, Barry still retained its position as the nation’s No. 1 ranked-team.

In “brutal” conditions and with a challenging setup, only one player in the field played the course in red numbers as Rollins’ Morgan Egloff won the tournament at 2 under by two strokes over Lynn’s Giovanni Manzoni and Barry’s Jorge Garcia.

Due to the Health Insurance Portability and Accountability Act, Purvis didn’t provide any further information on Healy’s injury status, but hopes to have him back for VSU’s next event, the Argonaut Invitational, hosted by West Florida, on April 1st.