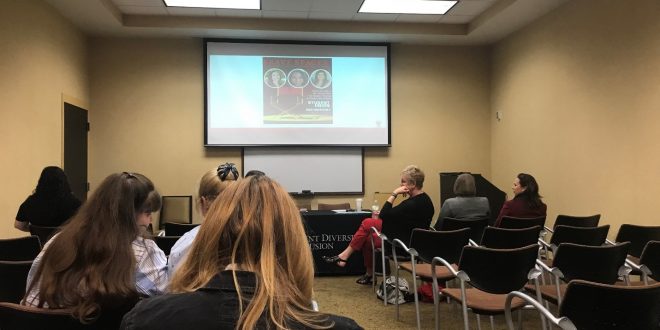 #MeToo, a simple hashtag used to create awareness about sexual assault, spawned into a global movement. With the high-profile takedowns associated with it, the climate to have an honest dialogue about the culture of sexual assault is now more open than ever.

This was the reason why Sandra Y. G. Jones, VSU Student Diversity and Inclusion director, made sexual assault on college campuses a topic of her Brave Space discussion panel, which tackles social issues that can affect students, such as racism and sexism.

The discussion kicked off with a short video about statistics of campus assaults, namely that 1 out of every 4 women will be a victim of it by the time she completes her undergraduate track. Men experience this as well at a rate of 1 out of 16.

Equally alarming were the statistics for people of color, people with disabilities and people who are LGBTQ, as they experience higher rates of sexual assault and rape. Twenty-eight percent of transgender students are sexually assaulted.

Strickland mentioned the information provided is just from the ones that are reported, as many cases go unreported.

“Many people don’t report because of the culture of victim blaming,” Strickland said. “People get told that it’s their fault or it wasn’t that serious. They’re branded as liars from the get-go, and it’s dehumanizing. It’s hard to get the full numbers on that alone.”

Ticknor pointed out that the generally accepted term for sexual assault covers actions that do not include consent, such as rape, attempted rape and sodomy. However, certain states, such as Georgia, doesn’t see it that way.

“Georgia’s laws on sexual assault are very different,” Ticknor said. “Under the statute, it doesn’t necessarily talk about the genders of individuals in relationships. On a federal level, the definition of rape was changed to include all genders until 2012. In Georgia, they didn’t make that update and the old laws are still on the books.”

This means that the state of Georgia will not charge an individual for the rape of a man. The most they can usually be tried for would be sexual battery, a misdemeanor.

“That makes it’s even more difficult to report on the man’s side, on top of the stigma they face as well,” Strickland said.

Changes to the federal law could potentially contribute to the problem as well, especially where college students are concerned.

“The Secretary of Education for this country, Betsy Devos, is trying to put forth legislation to change the regulation of Title IX for students,” Jones said. “It would be protecting the accused versus the victim.”

Ticknor pointed out this could make it even harder for administrators to properly investigate incidents of sexual assault.

“Due to Title IX, the span of time to fully process these incidents is 60 days, which is already spreading them thin due to all of their other duties,” Ticknor said. “For the current statute, they use preponderance of evidence. That means they can look at the evidence and be like ‘yes, the accused most likely did it.’ With these revisions, it could go into reasonable doubt territory.”

Hale then added that since rape cases are hard enough to prove with that standard, it’s only going to get harder for victims to get justice if that bar is raised.

Handling sexual assault cases is an already tricky situation for most colleges and universities, as crime statistics are a contributor for funding. It can get especially messy when the accused are athletes whose participation is another source of great revenue.

“The main reasons universities are so open with their stats is because it is vital for their funding,” Hale said. “Colleges are still a business, and it would be bad for business if your school is high in crime. So, sometimes it’s easier for them to look the other way or encourage the reporter that it’s too much trouble.

“And there’s the issue with athletes: Should we punish this person who is helping us make all this money? Plus, of course that will bring negative attention, so administrators are put in a really tough spot.”

Jones then opened the floor for possible solutions to spread awareness on campus and how to reduce discomfort surrounding the topic.

Mirakal Jackson, a senior art major, suggested that posters about events would do the trick.

“A lot of events get promoted through the VSU email,” Jackson said. “The problem is it gets so many email blasts, and I knew most people don’t read them anyway. I know people tend to stop and look at big posters and promo pics. I feel that would definitely get the ball rolling.”

“I went to a panel of young women for a gender study’s event,” she said. “When they were asked by a parent if they felt safe on campus, of all the girls, only one said yes. A safer environment would help with assault and for us to honestly talk about it.”

Hale finished the discussion by urging participants to come to the Counseling Center to report any incidents or to discuss the impact on one’s mental health.

Previous For the Culture: Come to the VSU Carnival
Next Thomas: First baseball game