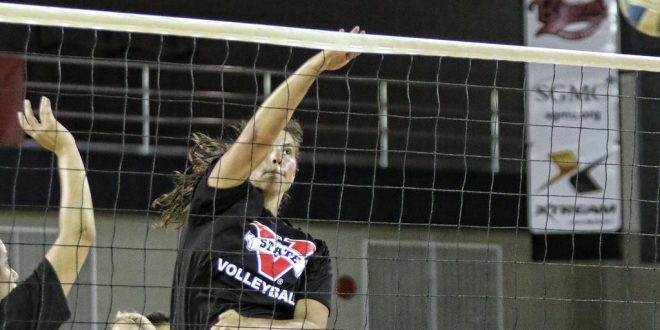 Widera was amed second team all-conference and earned GSC Player of the Week honors once in 2018 with a season-best 221 kills.

This was the day Kaleigh Zoucha was officially introduced as the new VSU Blazers volleyball head coach. After a 15-18 season of growth, Zoucha, entering her second season, said she wants battle through early contests.

“I think we definitely have put ourselves in a pretty good position where we are playing some really tough teams early on,” she said. “Ultimately, we want to be successful in our conference. We are putting ourselves in a situation to be challenged our first couple of weeks. We just need to play as hard as we can and compete like crazy in those games.”

The Blazers have seven incoming players and five returners. Zoucha said she has instilled cohesion among the players to ultimately have better years than the last.

“We are trying to get everyone on the same page again and I think we have seen really big strides in the returning players and we hope they have a more successful year from a statistics standpoint,” she said.

One of the returners include senior middle blocker Kayla Widera, who was recently named to the Gulf South Conference Preseason All-Conference Team.

The defensive ace has been a bright-spot for a relatively new team, last year with a team-leading 112 blocks.

It’s her defense that has catapulted her to one of the best in the GSC, but Zoucha implemented a plan during the off-season to ignite the offensive attack.

“We have kind of had a challenge in the off-season to all of our hitters, teaching them to hit higher and have a more variety of shots,” she said. “If they would go and get blocked by somebody [during games] that they don’t just keep doing the same thing over and over, but to know to hit in a different area of the court.”

Other forms of the shots the hitters worked on this off-season were hitting at the block’s hand, tip shots and hitting shorter shots.

To get to those good shots, the Blazers have junior setter Tammy Reyez-Perez, who led the team in assists and finished No. 48 nationally and second in the league with 1,173. She played in 123 sets last season to tie for the team-lead, while starting all 33 matches.

Nonetheless, Zoucha — much like any first-year coach — wants a better second season.

“We should be able to function as a team better,” she said of the off-season preparations to the first game. “We should be more familiar with each other. I have high expectations of the way that we compete and I hope that it gets better every game and a step up from last year.”

The season will begin for the Blazers on Sept. 5-7, 2019, at The Courtyard by Marriott/Terrace Hotel Classic in Tampa, Florida, with four matches.

Afterwards, the Blazers will travel to Ft. Lauderdale, Florida to play in the  2019 NSU Shark Invitational II on Sept. 13-14.

The Blazers open the 2019 home stand Sept. 17 at 6 p.m. at The P.E. Complex versus Albany State.  There are nine home regular season matchups for VSU.