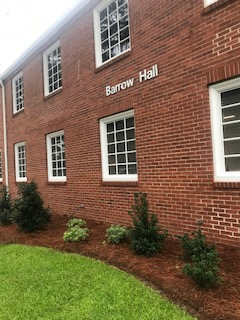 With a history as a dormitory, Barrow Hall now serves as a training facility for the Air Force ROTC. Picture Courtesy of Lenah Allen.

In the 1950’s, Barrow Hall served as a male dormitory. Today it serves as the new training facility for the Air Force ROTC at VSU.

VSU President Richard Carvajal and other contributors to the project celebrated the newly renovated Barrow Hall located on North Campus at 9 a.m. on August 19.

Barrow Hall has been around since 1951 and was last renovated in 1971. The New renovations include a gym, computer lab and common areas throughout the building.

President Carvajal is proud to support the largest ROTC Detachment in the state of Georgia and said that he is excited to have a facility to support the program.

“Every once in a while, we get to cut the ribbon on a new facility, and they are all in their own way special, but I would contend  that this one is uniquely so because of what happens in this building.” Dr. Carvajal said.

Stuart Parker, USAA chief executive officer and VSU alumni, was thanked at the ceremony. The Stuart Parker Cadet Commons in Barrow Hall was named after him in honor of his huge contribution to the project.

“The reason we are so dedicated to the ROTC department is because it’s about service,” Parker said. “It’s about building something beyond yourself and making a contribution that will help other people.”

Lt. Colonel Melvin Green, former Detachment 172 commander, said that the initial plans for the Barrow Hall renovations started under his direction, and he is glad that the plans were able to be carried out even after he retired.

“I think I had to see it through because it’s a great  and obviously I would have wished this was done when I was here.” He said. “It feels great just to see something that I had a hand in starting that process in order to get this building where it is.”

Alexander Williams, Cadet Wing Commander for Detachment 172, said that it’s awesome to have a new building to come to, but there is still potential for more growth.

“As of right now, me and my staff are trying to decide how to allocate those assets and how we’re going to use it because it’s still new to all of us.” Williams said. “I’m looking forward to it though, it’s going to be great.”

The hard work and dedication put into getting Barrow Hall and The University Warehouse fully refurbished has paid off and will continue to serve its purpose to the ROTC program.

Previous Blazers voted No. 1 in AFCA poll for fourth time
Next Football deepens the rivalry with VSU, Albany State