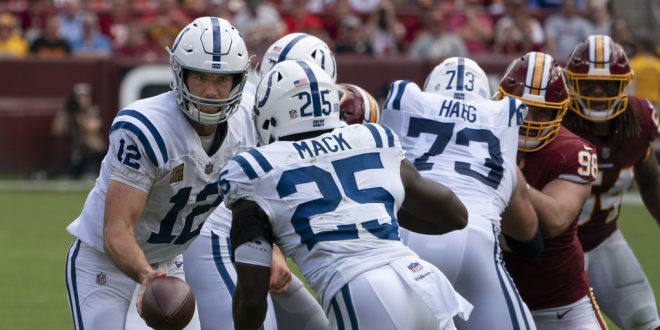 Andrew Luck (12) hands off ball to running back Marlon Mack (25) against the Washington Redskins on September 16, 2018.

Andrew Luck, the former Indianapolis Colts quarterback, announced his retirement from the NFL on Aug. 24. Luck faced major backlash from fans in the days following his announcement.

While Luck’s retirement one week before the season’s start came as a shock to the fan base, they seem to not see the bigger picture when it comes to the health of an athlete, especially in such a high-stress sport as football.

In just six NFL seasons Luck suffered from torn cartilage in two ribs, a partially torn abdomen, a lacerated kidney, one concussion, a torn labrum in his right shoulder and the more recent calf and ankle injury.

The timing may not have been right, but Andrew Luck chose his health over the game.

The league most likely knew long before Luck’s announcement of his plans to retire. Colts fans have a right to be frustrated, but they shouldn’t have “booed” him.

Luck played six long seasons with the Colts, as a replacement for Peyton Manning. Those are big shoes for anyone to fill.

The NFL is a billion-dollar company and that is important to remember. They have no actual care for each and every player that goes out and plays. There were 281 reported concussions in the 2017 season alone. Those concussions add up over the years.

Luck needed to take charge of his health and the fans should have respected that. He wasn’t the first pick of the 2012 draft for nothing. He is intelligent and knows his limits.

“It feels like a weight has lifted,” Luck said in retirement press conference. “Part of my journey going forward is to figure out how to get out of pain.”

It is unknown if Luck will ever return to the field once he is fully recovered, but his future is more important than our present. The Colts may be out of Luck this season, but there is promise in the young Jacoby Brissett.

Previous Introducing SpecTalk, the voice of students, by students
Next It Happened: 2019 The Happening a Success