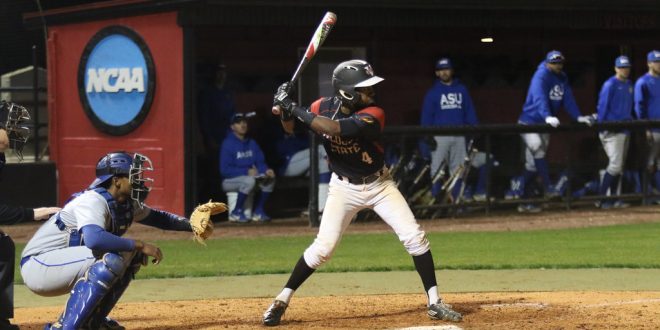 Jowenrick Daantji will be a key player to make up for lost seniors in 2020. He will play in the the VSU exhibition versus Polk State Nov. 1.

Blazers baseball set to have exhibition versus Polk State College

Blazer bats are back for the new season.

VSU baseball will open its 2020 season on Nov. 1. The Blazers have an exhibition game against Polk State that will be at home on Billy Grant Field.

It’s a return after a strong 2019 season for the Blazers, who reached the GSC Championship game before losing to Delta State, then losing to Delta State again in the NCAA South Regional tournament. It was still considered a really good finish after an up and down regular season, resulting in the Blazers best finish since the 2013 season.

Polk State comes into the exhibition as one of the most consistent junior college teams in the country. They won six straight conference titles up until 2017.

The game will be a great opportunity for the Blazers to showcase some new leaders, with the team losing nine seniors, including their top three hitters and Josh Broughton, DJ King and Mack Hathcock. They were three of the team’s top five hitters last season.

Outfielders Jowenrick Daantji and Logan Stephens will be tasked with leading the offense, while the Blazers pitching staff projects as one of the best in the conference.

VSU Blazers return nearly their entire pitching staff, including their top three starters in Tristan Cone, Cooper Cain and Zach Blankenship. Cone was seventh in the conference with a 3.10 ERA and Cain made headlines by throwing a no-hitter last season.

It’ll be a great opportunity for the Blazers to get the new players up to speed and work on finding a new lineup, replacing the former players.

First pitch will be at 2 p.m. for this free event, as the Blazers get ready for opening day on January 31.