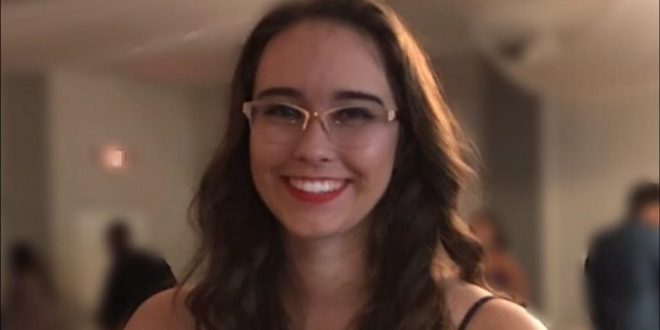 Danielle Spivey is president of Alpha Chi Honor Society and a member of Spanish Club.

“She is going to be one of those people who evokes change in the world,” said a peer when talking about Danielle Spivey, a junior Spanish major with dreams to do just that.

Spivey is no stranger to taking control and leading others in the right direction. The first organization she was involved with on campus was Spanish Club. By her sophomore year of college, Spivey was already president.

“I fell in love with the culture I experienced, and I wasn’t worried about making quick decisions regarding the club,” Spivey said.

She is also the current president of the Alpha Chi Honor Society.

“I would say one of my main accomplishments here is being president of that club,” she said.  “It’s for the top 10% of juniors and seniors.”

Spivey says that being a member and a leader of two very active clubs has been very rewarding for her.

“Helping other people to achieve one common goal is something I’ve always strived for and loved,” Spivey said.

Her positive attitude and ability to get students engaged in events are what Nora Brown, a senior philosophy major, said are a few of Spivey’s positive characteristics.

“I’d say her best qualities are her communication skills and enthusiasm for projects she’s involved in,” Brown said.

Spivey also devotes her energy to community service. She used her position in the Spanish Club to help organize and celebrate “Dia de Los Muertos.”

Spivey and the Spanish Club invited middle school students to experience Mexican culture and educate them on the holiday.

“It was amazing seeing all of the students interacting with our professors and our students here at VSU,” Spivey said.

Spivey said that her time with the Spanish Club developed her as a leader.

“I learned so many skills from talking to people to organizing events, big or small,” Spivey said. “I used to not be as communicative with people, but now I can do it.”

Spivey says that being involved in something gives the college experience meaning.  She talks about a Spanish Club event called “Dinner and Dancing” which in itself has made her feel a lot more at home. This event allows students to bring a dish from their culture.

“It gives students the opportunity to share something from their home when they’re away from home,” Spivey said. Without being involved with this organization, Spivey would have never had the chance to experience so many different sides of other student’s lives.

From the highs and lows of everyday college life, Spivey has found her own little place to unwind and connect with other people.

Previous Tension Builds: Mayoral candidates address transportation, racial tension
Next Which courses should you enroll in?