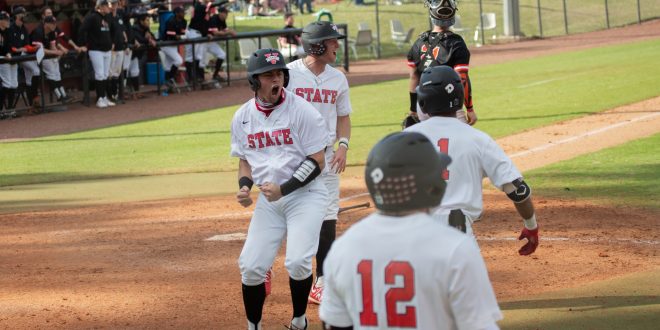 Blazers look to bounce back against Delta State

After a rough series against West Florida last weekend, VSU will look to remedy hitting issues at Delta State this coming weekend.

Despite a rough start to Delta State’s season, a six-game winning streak has the Statesmen above .500 with an overall record of 12-10 on the season and 10-10 in conference play.

Delta State took both ends of a doubleheader against Christian Brothers in a series that was delayed until Monday due to rain.

VSU suffered a sweep at home last weekend at the hands of a solid West Florida team. Clutch defense shined for West Florida in a series which saw them record 50 hits while VSU only managed 36.

VSU loaded the bases in seven different innings during the final two games of the weekend – many times with one or no outs. However, VSU recorded only three hits during 16 at-bats (.188) in those situations Saturday and stranded 13 runners on base.

VSU head baseball coach Greg Guilliams emphasized that was something the Blazers regularly worked on in practice but weren’t able to execute against a West Florida rotation that leads the GSC in ERA.

“We had 38 opportunities with runners in scoring position, but we only hit the ball [where we aim in practice] four times,” Coach Guilliams said.

On the bright side, loading the bases seven times in two games is an impressive feat against anyone especially West Florida, even if not much came of it. However, those hits will have to be turned into runs against Delta State.

This is not something that VSU has struggled with throughout the season, averaging over seven runs per game this season, third in the conference. However, during their current winning streak Delta State has averaged over eight, which would rank first.

A large part of Delta State’s recent hitting has been junior Blake Wolferding. The outfielder missed the first eleven games of the season, but he’s been on fire since returning, embarking on a 10-game hit streak that ended in Monday’s last game.

Wolferding paces the team in both batting average (.375) and slugging percentage (.700) and has recorded three homers and 13 RBI in his eleven games so far.

Delta State is currently sixth in the conference in batting average (.276), but recent hot hitting may cause this number to be slightly understating. Coach Guilliams knows the team will have to be prepared for Delta State’s offense.

“They always hit well, and their ballpark is a lot smaller than ours,” Coach Guilliams said. “But it starts on the mound, so our pitchers have to execute better [than against West Florida].”

Delta State’s pitching rotation is not as formidable as West Florida’s, but it is still solid and has been improving as the season has matured. Their 3.87 team ERA is fifth in the conference, and their .249 batting average allowed is fourth.

Their day one starter, RHP Hunter Riggins has been good this season, better than his 3-3 record would suggest. In seven starts, the junior has a 2.61 ERA, seventh in the conference and has two complete games under his belt already.

It will be worth watching to see how VSU handles the matchup against another excellent pitcher after hitting the ball well against West Florida last weekend.

So, bouncing back in the Delta State series is crucial for VSU to stay in the post-season race. But don’t let the 12-10 record fool you.

VSU is currently mired in an eight-game losing streak against Delta State going all the way back to April 2017 (the teams didn’t play last year during the COVID-shortened 2020 season).

A couple weeks later, Delta State beat VSU twice more to eliminate the Blazers from the regional tournament and end our season as well. However, the program has changed some since then.

Delta State’s slow start to the season is likely attributable to a team still adjusting to a relatively new coach and system. However, while Coach Batts and the Statesmen might have stumbled out of the gate this season, it seems clear that they’ve gotten the ball rolling now.

While this may be a different team with a different coach and system than VSU has dropped its last eight games to, Delta State’s current winning streak is evidence that they may be more formidable than their 12-10 record suggests.

Coach Guilliams has an idea of what to expect though.

“They have a winning tradition; players that go there expect to have success,” Coach Guilliams said. “So if you’re gonna beat them at their place, you’re gonna have to play well.”

Previous Moore Money: Kenny Moore II goes from undrafted out of VSU to the highest-paid slot CB in the NFL
Next Student raises funds to aid the homeless