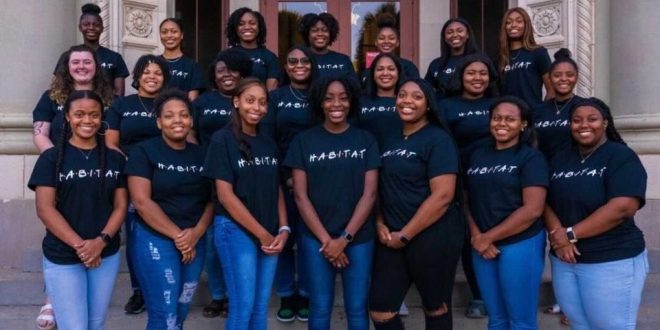 Giving back to the community is an opportunity students can be part of at least once during their college years.

Nyiana Flournoy, a senior communication sciences and disorders major and President and Public Relations chair, gives to the community through Habitat for Humanity.

“The organization on campus works with the Valdosta chapter in hosting fundraisers, [food] drives and sometimes we help the [Valdosta] chapter build houses,” Flournoy said.

The nonprofit organization hosts a multitude of other community service initiatives and givebacks to serve the Valdosta-Lowndes communities in need.

Flournoy joined Habitat for Humanity as a sophomore in order to get more involved on campus and has enjoyed her roles in the organization ever since.

“I joined Habitat [for Humanity] because I wasn’t part of any organization on campus,” Flournoy said. “I asked the old president, ‘how do you join?’ because I wasn’t doing anything else, so I joined, and it became like a family to me.”

After learning about the positions that were available at the time, Flournoy became a member and was deemed the Public Relations Chair. Soon after, she was also given the role of Membership Chair.

Being a member of Habitat for Humanity is more than meeting up as a group and doing community service. As former Membership Chair, Flournoy said being part of this group is also about becoming family.

“We have game nights, picnics, and go [to] places like bowling as part of membership bonding,” Flournoy said. “It’s not all community service. We want you to gain friends and get out there [to help].”

As a group, Habitat for Humanity here at VSU is focused not only on serving students and the community, but also making sure the events they host are engaging for everyone involved.

“We have a car wash that’s open for all, and people who come pay money, so that we can donate it to the local chapter,” Flournoy said.

Flournoy said the restaurant fundraisers and their upcoming Adopt-A-Road service project are scheduled for Sept 11. She says she also hopes to host a campus cleanup event in the next month.

Habitat for Humanity has also branched out on campus and set up places like Blazing Café in Pound Hall to be a part of providing food and drinks to students.

“I feel like the organizations that do community service—we collaborate with them a lot to better the community and Valdosta State because why would you not want to better the school you go to,” Flournoy said.

According to Flournoy, Habitat for Humanity wants to keep the campus clean, keep all of our roads that we’ve adopted clean and says “don’t litter, make Valdosta glitter.”

Flournoy encourages people to become involved with Habitat for Humanity so that they, too, can be a helping hand in the community.

“We have an interest meeting on Wednesday, but if anyone misses that then they can always follow us on social media and send a DM [direct message] to get in touch,” Flournoy said.

Habitat for Humanity has an active media presence on Instagram, Twitter and Blazer link, all of which can be used for anyone with an interest in joining.

Flournoy says she hopes that all members of Habitat for Humanity “leave knowing they made someone else’s day.”