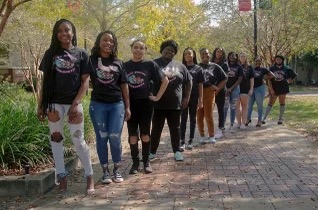 VSU’s Her Campus organization is hosting a series of events from Sept. 7 to Sept. 10 as part of their first-ever Pink Week.

These events are a trivia night, a game night, an ice cream social and a suicide prevention event.

“Her Campus is the #1 online magazine dedicated to collegiate and post-grad women on how to navigate life during college and after,” Haley Waters, VSU’s Her Campus president, said. “We write articles every week on different topics.”

“The importance of having Pink Week is just allowing ladies to come bond with the members of Her Campus to see what we’re like and what our organization is all about,” Waters said. “This is sort of our recruitment week before our interest meeting on Sept. 14.”

Kicking off Pink Week is trivia night. The theme for trivia night is The Sims, and the event is set to be held in the Bailey Science Center on Sept. 7 from 7-8 p.m.

“The Sims 4 is my favorite game,” Waters said. “However, my Vice President, Dom Pollard, came up with the idea of having the event, and I’m glad they did because we both love the game, and we know others do as well, so we thought it’d be an interesting event to host.”

According to Waters, games that will be played include Cards Against Humanity, Star Wars Monopoly and For the Girls.

Following an ice cream social on Sept. 9 from 12-4 p.m. on the Student Union steps will be a suicide prevention event on Sept. 10. The event, which will be held from 12-2 p.m. in the Student Union, will have students leave positive affirmations on post-it notes throughout the rotunda.

Waters believes this event is a good way to wrap up Pink Week, even though it is a more serious event in comparison to the other events being held.

“I wanted the suicide prevention event to be on a Friday because Friday is the day people either have no classes or at least one so their schedule isn’t as busy,” Waters said. “So, they have a higher chance of coming out and participating. Suicide prevention is a cause that’s very dear to me, so I wanted everyone to be able to come out and support.”