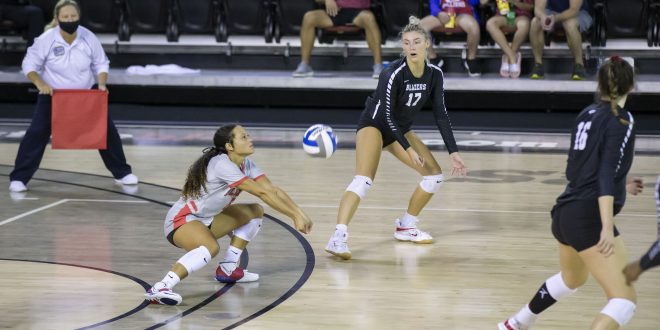 The VSU women’s volleyball team split their four-game stand in the VSU fall tournament, which was held at The Complex on Sept. 10 and 11.

The tournament was filled with both highs and lows for the Lady Blazers.

Their 2-2 record in the tournament placed them fourth among the six schools who attended the tournament. The tournament also included Eckerd, Saint Leo, Albany State, UNC Pembroke and Arkansas-Fort Smith (UAFS).

VSU got off to a rough start in the tournament, dropping their opening match against Eckerd 3-0. VSU also played Eckerd in the Flagler Saints Invitational on Sept. 3, losing 3-0 in that match as well.

VSU was behind early and often against Eckerd and never seemed to be in rhythm. Despite making a comeback attempt during the third set, the Lady Blazers were ultimately unable to win any of the sets.

“We needed to do a better job at serve receiving and get into our offensive system more often,” Kaleigh Zoucha, VSU woman’s volleyball head coach, said. “I thought we were kind of tight during the first two sets of the game.”

The highlight of VSU’s tournament run came in their second match on Friday. After falling behind 2-0 against UAFS the Lady Blazers rallied and won the final three sets to take the match 3-2.

Freshman JoJo Smith paved the way for VSU in their win over UAFS. She accounted for 27 of VSU’s 57 kills and three of VSU’s six blocks.

Smith was a force throughout the tournament, accounting for 53 kills, 5 aces and four blocks in VSU’s four matches. Unfortunately, Smith did not return to action after hitting the floor hard going up for a block during VSU’s final match against Saint Leo.

VSU’s momentum from their comeback win against UAFS carried over into their first match on Saturday.  The Lady Blazers downed UNC Pembroke 3-0 in that match.

However, Smith’s absence during VSU’s final match proved to be too much to overcome. After Smith’s exit during the second set, VSU struggled to get anything going against Saint Leo, resulting in a 3-1 loss.

“We missed having Smith out there,” Zoucha said. “We needed other players to step up, and it just didn’t happen. We had some good wins overall, but there is also some stuff we need to work on. We need to learn to adapt to in-game situations better.”

Up next for the Lady Blazers is a three-game stand in Milledgeville on Sept. 17 and 18. VSU will be taking on Georgia College, Augusta University and USC Aiken during that stretch.

Previous Photos: Math Media reigns victorious in Triviarama event
Next Amari Jones is one of a few redeeming qualities of Titletown High