Home / Entertainment / ‘Venom: Let There be Carnage’ draws fans in for a sequel, now a top grossing film of 2021 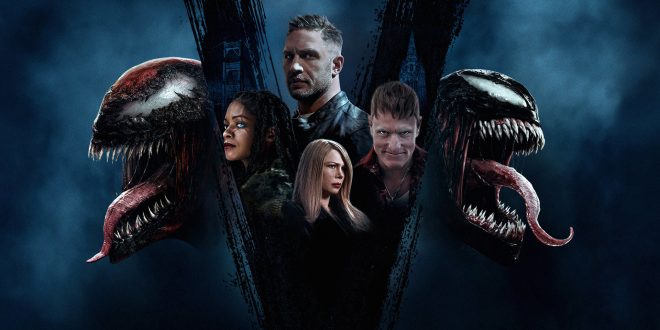 ‘Venom: Let There be Carnage’ draws fans in for a sequel, now a top grossing film of 2021

A charming sequel to the original, “Let There be Carnage,” was released into theaters in association with Marvel, and was created and filmed by Andy Serkis and Columbia Pictures.

The film was initially released in theaters on Oct. 1. Raking in 365 million dollars since release, it has stolen the rank of the ninth highest grossing film in 2021.

Beginning where the last film left off, Venom and Eddie have become unexpected allies and attempt to settle into their lives again as symbiote and host. As Eddie gets back to his networking show, he interviews serial killer Cletus Kasady (Woody Harrelson), who refuses to speak to anyone but Eddie.

After being provoked by Cletus, Venom attacks Cletus, and Cletus ingests a portion of Venom a result.

This film is focusing harder on developing the protagonists who were introduced in the first film and building off the plot of the seven symbiotes from the Life shuttle mission.

Venom’s character is given particular focus, as he lashes out to others, becomes petulant, pouts and attempts to cheer Eddie up in a variety of strange ways. Eddie struggles to get over his heartbreak of his former fiancé, Anne Weying (Michelle Williams), and her new relations with the doctor.

The consensus after viewing the film was that it was a vast improvement from the original and an enjoyable experience all around. The theater laughed and snickered at Venom’s wise commentary, his antics and sat on the edge of their seats during the finale.

This film focuses on the emotional impact of the symbiotes as they infiltrate a society of human beings of which they know nothing about. The directors worked with dancers as well as actors to create the characters of Carnage and Venom in this film, creating their respective forms to reflect their hosts.

While Venom is related to a quarterback, Carnage is related to an octopus, who walks and makes his movements in an off-balanced way to reflect Kasady’s psychopathic nature.

The lengths by which these producers, directors, actors and designers went through with creating this thrill ride is palpable and something that they obviously show great care for.

Look forward to the new installment being released in just a month and some days, in Spiderman’s feature film “No Way Home.” As for “Carnage”, I give four out of five stars.