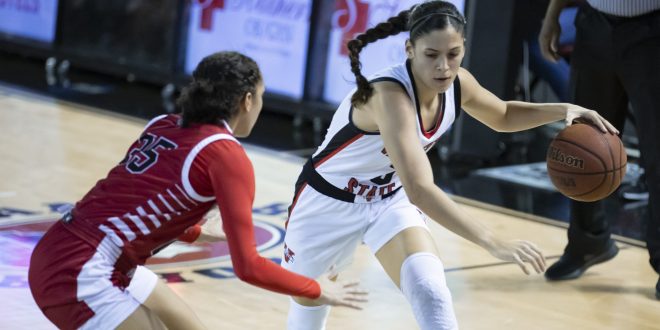 The VSU women’s basketball team will be looking to improve their postseason positioning in their upcoming two-game home stand.

Perched just outside the top 25, the Lady Blazers (19-4, 14-2 GSC) have already clinched a spot in the GSC tournament and have secured home field advantage for the quarterfinal round. Still, there is much more to play for.

The Lady Blazers will open their final home-stand of the regular season with a de facto second-place showdown with No. 25 Lee on Feb. 17 at 6 p.m. Following this, VSU will face Shorter on Feb. 19 at 2 p.m.

Their game against the Lady Flames (19-4, 13-3 GSC) is important in the GSC tournament picture.

With a win over the Lady Blazers, Lee would not only tie VSU in the conference standings but also own the tiebreaker for the No. 2 seed. The Lady Flames previously beat VSU 56-45 in Cleveland, Tennessee, on Dec. 13.

Conversely, a win for VSU would all but lock up the No. 2 seed in the GSC tournament.

A win would also improve their standing for the NCAA Division 2 tournament. The Lady Blazers are currently ranked fourth in the South Region.

The Lady Blazers will face a tough challenge from the Lady Flames. Lee is one of the most balanced teams in the GSC, ranking second in both offensive and defensive scoring.

VSU will also have their hands full with one of the most prolific players in the conference in Haley Schubert. Schubert is averaging 17.4 PPG and 5.3 APG, good for fourth and first in the conference respectively.

The Lady Blazers have a balanced attack themselves, ranking first in the GSC in scoring defense and fifth in scoring offense.

VSU is led by one of the best duos in the GSC in graduate students, Kwajelin Farrar (14.5 PPG) and Nicole Heyn (13.5 PPG). Farrar and Heyn are also both in the top ten in rebounds, with Farrar averaging 8.5 rebounds per game and Heyn averaging 7.5 per game.

As for the second half of their home stand, the Lady Blazers will face a different challenge from Shorter. The Lady Hawks enter the contest just 4-13 overall and 1-12 in conference play and have already been eliminated from postseason contention.

The Lady Hawks are also near the bottom the conference in both scoring offense and scoring defense, ranking 12th out of the 13 teams in the GSC in both categories. Because of this, they are ranked last in the GSC in scoring margin, getting outscored by over 14 points per game.

While the Lady Blazers beat Shorter 88-40 in Rome, Georgia, earlier in the season, VSU won’t be taking the Lady Hawks lightly as they will be looking to extend a 12-game winning streak in the series.

Following their home stand, the Lady Blazers will travel to Carrolton, Georgia, on Feb. 26 to face West Georgia in their regular season finale before returning home to prepare for the GSC tournament.