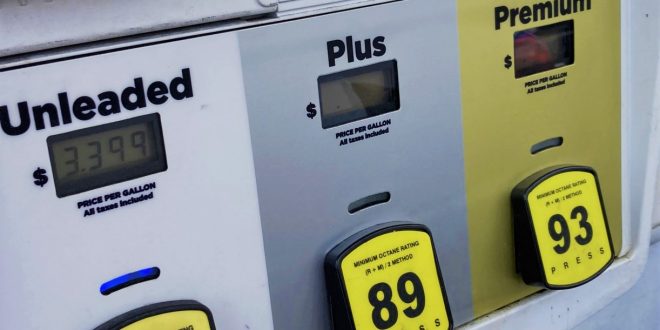 Gas prices have been steadily on the rise since the end of April 2020, and that isn’t expected to change anytime soon due to inflation, international tensions and COVID-19.

According to GasBuddy, gas prices have continued to rise for the past seven weeks. A gallon currently costs an average of $3.47 nationwide, which is 4.6 cents more than last week and 97.2 cents more since February 2021.

“The jump in gasoline prices has continued unabated as oil prices continue to push higher, reaching $94 per barrel last week on continued concern over the possible imminent threat that Russia may invade Ukraine,” Patrick De Haan, head of petroleum analysis at GasBuddy, said in a blog post on their website.

The United States receives approximately 7% of its petroleum oil from Russia, and as tensions continue to rise between Russia, Ukraine, NATO and the European Union, oil supplies are starting to slow down like they did at the start of the pandemic.

Russian President Vladimir Putin currently has more than 100,000 troops stationed near the Ukranian border. According to the Atlantic Council, Ukraine threatens Russia due to its status as an independent nation, halting Russia’s attempt to regain control of its neighboring countries since the end of the Cold War.

According to the Associated Press, Russia supplies oil to most of the world. While these tensions are leading to higher crude petroleum prices, it is not the main problem. Should Russia choose to invade Ukraine, there may be economic sanctions put into place by the US and its European allies, leading to oil shortages and higher prices around the world.

“The U.S. industry is kind of just waking up from its pandemic slowdown and the countries, the OPEC nations and their market allies, have had a lot of trouble pumping enough oil to meet what they’ve told the market they’ll produce,” Ryan Dezember, a writer for the Wall Street Journal, said in an interview with PBS. “That could even get worse, depending on the situation in Russia.”

According to the US Bureau of Labor Statistics, OPEC nations and Russia agreed to cut oil production due to the drop in demand caused by the pandemic on March 5 and 6, 2020.

However, as restrictions began to lift in April 2020, the supply and demand for petroleum oil increased. By summer 2020, oil prices slowly decreased before spiking again as the pandemic lingered on.

This is due to the world’s recovery process, primarily inflation.

Inflation occurs due to supply and demand. As demand increases during the COVID-19 recovery process, supply needs to be able to match it. This means higher production costs and higher consumer prices.

The current rate of inflation in the US is 7.5%, the highest it’s been in 40 years, according to tradingeconomics.com.

The US will see a drop in gas prices once the supply of crude oil is able to meet the demand, but when that will take place is still unclear.

Here are the current prices per gallon at six different gas stations in Valdosta. 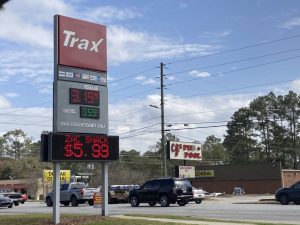 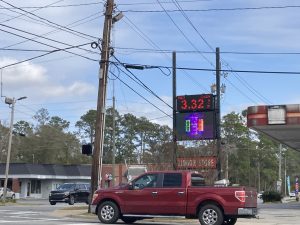 The station in front of Smitty’s Liquor Store at 923 Baytree Rd. 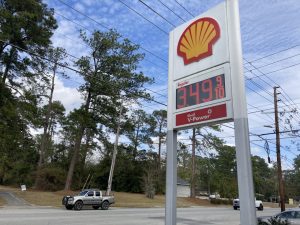 The Shell station at 901 Baytree Rd. 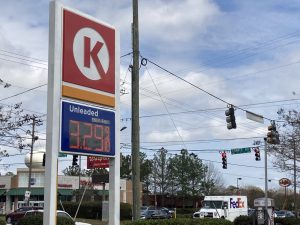 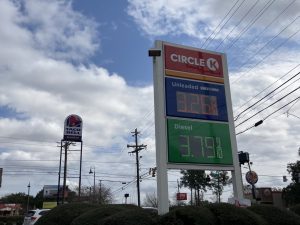