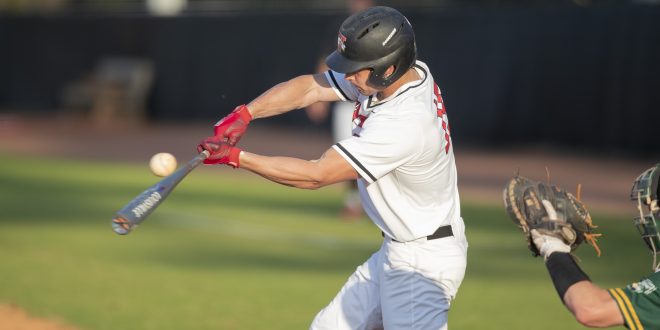 “I want a walk-off!” Raymond Fields bellowed to his dugout as he walked off the mound after recording final out of the top of the ninth inning for VSU in their home opener Wednesday night.

Jisjar Clotida delivered on his pitcher’s demands in the bottom of the ninth with a rocket hit deep into the right field corner to send EJ Doskow around the bases and beat the St. Leo Lions 8-7.

“EJ can really run,” Blazer head coach Greg Guilliams said after the game. “He doesn’t look like it, he’s a big guy, but he can really run. And once that ball got down in that corner, I thought, ‘he’s probably going score.’ I was just hoping he’d [Clotida] find a way to get on. I mean, I didn’t think, ‘gosh he’s going to hit a triple and the guy [EJ] is going to score from first.”

But with two outs already on the board for the Blazers, Doskow was going to be taking off at the first crack of the bat. When he saw where the ball was hit, he knew the game was over.

“I’m scoring,” Doskow said, remembering his first thoughts. “As soon as he hit it I knew I could make it. I said, ‘send me, I’m going. I don’t care if I was thrown out by a mile I was still going to go.”

Instead, he was safe by a mile as JJ made his way to third base, and the white jerseys that had hesitantly spilled out of the Blazer’s dugout took off in celebration.

With the win the Blazers improved to 4-3 on the season, but this one, like many of the Blazers’ early victories, has not come easy.

“It was a 15-round bout,” Guilliams said. “I mean we threw some punches early; they came right back. We scored, they scored and that’s what good teams do. But when you have an opportunity to win the game, you need to take advantage of it.”

The Blazers actually led going into the final inning Wednesday, but in the top of the ninth, the Lions tied the game back up at seven runs with a leadoff triple and a sacrifice fly off of Blazer reliever Adrian Garrastazu.

Garrastazu got two more outs but then walked his second batter of the inning and came out for Raymond Fields. That’s when the 6-foot-3 sophomore threw two pitches and got a swing on a nasty breaking ball.

It hopped right to sophomore Preston Joye at second base to make the final out of the inning and set the offense up to win it, and Fields wanted to make crystal clear the they knew what to do next.

Fields notched the win for the game, the first of his career at VSU in only his second ever appearance for the Blazers.

But like Coach Guilliams said, it was a long back and forth game, and the Blazers had multiple pitchers step up Wednesday night.

A couple of Blazer errors in the fifth inning got the Lions bats going as they scored three runs and tied the game at four all. Before that, however, the Lions had managed only two hits of starter Brandon Raiden.

In the bottom of the frame, the Blazers responded by capitalizing on a couple of errors by the Lions to go back up 6-4, but the Lions scored runs in the sixth and seventh innings as well to tie it up.

Blazer sophomore, Scott Curran came on with a runner on base and no outs in the seventh.  Curran wasn’t able to keep the runner from scoring as the Lions tied it, but the 6-1 right-handed hurler struck out the next two batters.

He rarely allowed base runners over the next inning and two thirds as he allowed no runs, one hit, and no walks.

“Scott pitched really well.” Guilliams said. “He struggled a little bit this weekend and then he came back tonight and threw really well. He was getting all his pitches over, he kept the ball down. He’s got a really good cutter and that pitch was giving them a lot of trouble.”

Doskow knocked in his Gulf South Conference leading 14th run in the fifth inning when the Blazers responded to the Lions three runs with two of their own to retake the lead. Doskow was one of six Blazers to record an RBI Wednesday.

The Blazers (4-3) continue their homestand this weekend Feb. 19, and 20 against Alabama Huntsville (3-5) . The three-game series opens GSC play for both teams.

Previous Photos: Gas prices continue to rise
Next Column: How to be a good roommate