Home / Entertainment / ‘The Wolves’: differences do not change sisterhood 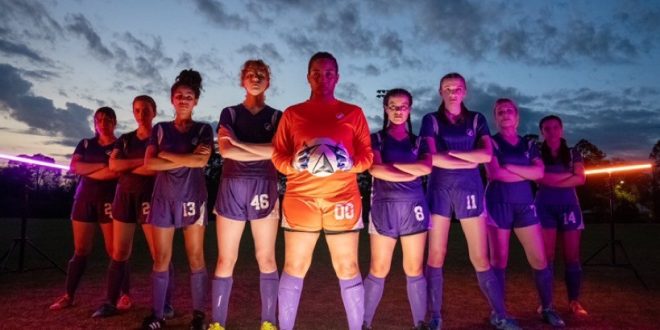 ‘The Wolves’: differences do not change sisterhood

On Feb. 24, VSU’s Theatre showcased Sarah DeLappe’s “The Wolves” where it followed a group of teenage girls as they prepare for their weekly Saturday soccer game, while also attempting to navigate through their adolescents from differing paths.

“The Wolves” touches on arguments about whether a man of old age should still be imprisoned for life, if it Is okay to make harmless jokes about pregnancy or if it’s okay to say the r-word.

The goalie #00 struggles with anxiety and is teased for throwing up before each game. Meanwhile, the team captain #25 tries to assert herself in order to gain control of the team but sometimes finds herself challenged by #7.

There is also a love/hate relationship between #7 and #14 where one friend angrily admits to the other that she felt pressured to have sex when she was left alone with a guy.

Towards the ending of the play, the Wolves experience a sudden death which leaves the team in despair and anger. However, once the team reunites as a whole and with the pep talk from a soccer mom, those negative feelings are turned to compassion and determination.

Despite the arguments and tension that the girls may have, they always united before each game. Delappe’s play displays a visual interpretation of “we are better together.”

The actors do a great job at embodying the teenage demeanor of the girls from their gossiping and silly teasing to their mature expression of their opinion on the state of the world.

Additionally, The VSU theatre team gave exceptional and professional service to each guest, adding to the quality of the showcase.

During “the Wolves,” the audience acts as a fly on the wall while they observe the truest nature behind a group of girls with strong personalities who each desire to make their mark.