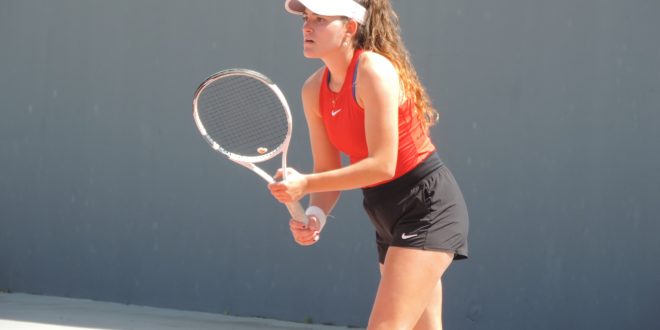 The VSU tennis teams continued their lengthy road trip away from Valdosta with matches against Gulf South Conference foe Montevallo on April 8.

For the men’s team, the win was the fifth straight, a streak that dates back to a 4-1 win over Lynn on March 25. Conversely, the women’s team have dropped two straight after going on a season-high three-game winning streak.

The Blazers earned the first point of the match in the doubles section, sweeping all three matches.

The men’s team kept it going into the singles section, with the Blazers winning all six games. Five of the matches were won in straight sets.

The lone match that went to three sets was Trigolos’ match against Alexandre Laplante. After winning the first set 6-3, Trigolos lost the second set 4-6 before rebounding in the third set 10-4 to secure the shutout.

Carvalho had a strong showing in his match against Salton, losing just two games en route to a 6-2, 6-0 victory. Junior Christian Felline picked up his fourth win in five matches, defeating Martinez 6-2, 6-2.

The win for the Blazers puts them just a game back of West Florida for first place in the conference.

While freshmen duo Adriana and Andrea Barrio had a 6-4 win over Lieselott Hartlohner and Emily Hafner, their victory would not be enough to propel the Lady Blazers to the doubles point.

The Lady Blazers’ struggles continued into the singles portion as they dropped four of the six matches. Much like the men’s match, five of the matches were won in straight sets.

That included Adriana Barrios match against Barfoot, where Barrio came out on top 6-3, 6-2. Andrea Barrio, however, had a much different outcome, falling 1-1, 4-6 against Hartlohner.

Bonet rebounded from the doubles loss with a solid performance against Mirela Turro, winning 6-2, 6-3. However, the final nail in the coffin for the Lady Blazers came against freshman Anastasila Vorobiova, who lost in three sets, 2-6, 7-5, 6-7.

With the loss, the Lady Blazers dropped to fifth place in the conference, with Montevallo taking over fourth place.

The VSU tennis teams will conclude their road trip with a showdown against Columbus State in Columbus, Georgia, on April 13 at 3 p.m. They will then return home to face Flagler on April 15 at 2 p.m.