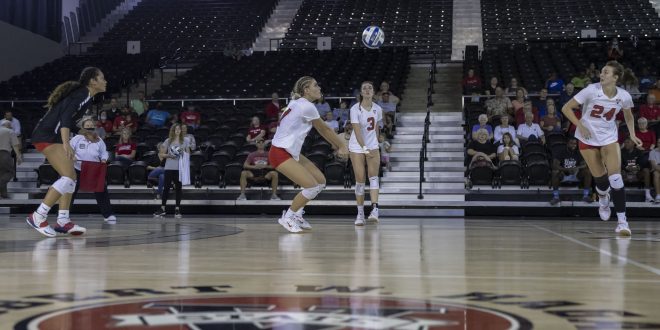 The VSU women’s volleyball team opened their season with a five-game road trip spanning from Aug. 25-27, including a four-game stint in the Sandy Hoffman Memorial Tournament, going 1-4.

The Lady Blazers, despite losing four of five to open the season, showed some signs of resiliency from what is a young squad. Of the 14 members on the team, 12 of them are sophomores or freshmen.

Prior to their first tournament of the season, the Lady Blazers made a pit stop in Manchester, New Hampshire, to face off against the Saint Anselm Lady Hawks, falling 3-0.

Errors were the difference in this one. The Lady Blazers committed 22 errors over the three sets, whereas the Lady Hawks committed just nine errors.

Despite that, the Lady Blazers did hang tough in the first set, falling short of a rally from a 16-6 deficit and losing 25-19.

VSU again found themselves in a big hole in the final set, trailing 14-5 early. Though they did rally and cut the deficit to 16-11, they would get no closer as Saint Anselm closed out the match with a 25-19 win.

Graduate student outside hitter Mallory Roney was among the top performers in the loss, recording seven kills and two blocks. Sophomore setter Giulia Dias also had a solid performance, leading the Lady Blazers with 17 assists and six digs.

Errors continued to plague the Lady Blazers in their opening game of the Sandy Hoffman Memorial Tournament, taking place in Waltham, Massachusetts, losing to the Purdue Northwest Pride 3-0.

The Lady Blazers struggled to keep pace with the Pride throughout the match, connecting on just 13.6% of their attempts compared to 33.6% from the Pride.

The third set was more evenly balanced, despite the Lady Blazers finding themselves behind throughout the set. Still, the Lady Blazers’ rally from a 24-18 deficit late in hopes of extending the match fell short, as the Pride walked off with a 25-21 win.

Roney again led the team in kills, recording 10 in the match, along with four digs. Sophomore setter Victoria Zarazel led the team in assists with 16, followed close behind by Dias, who had 14.

Though the Lady Blazers again got swept in straight sets at the hands of the American International Lady Yellow Jackets, they hung in tough throughout the match.

The first set of the match was an exchange of points throughout the first half of the match, with both teams being tied 10-10. However, the Lady Yellow Jackets went on a 10-3 run to take control of the set, going on to win 25-17.

VSU continued to stay tough in the final set, clinging onto a 21-16 lead late in the set. A late rally by AIC proved to be the difference, however, as they scored seven unanswered points and won 25-23.

Zarazel put up a double-double in the match, recording 14 digs and 13 assists. Sophomore outside hitter Jojo Smith led the team in kills with 12.

The Lady Blazers started off day two of the Sandy Hoffman Memorial Tournament by facing host Bentley. Though hanging in throughout the match, the Lady Blazers lost to the Lady Falcons in straight sets.

A back and forth affair in the first set turned into a 23-15 deficit for the Lady Blazers. VSU scored the next four points before ultimately falling 25-19.

The second set saw VSU fall behind early 10-5. However, the Lady Blazers closed the gap to take a 15-14 lead.

The third set played out in a similar fashion to the first, with Bentley building a 22-15 late in the set. The Lady Blazers went on a 7-2 run to make it a 24-22 game, but a kill from Bentley’s Amanda Parker iced the set and the match.

Determined not to return home empty-handed, the Lady Blazers dominated the stat sheet en route to a win over the Holy Family Lady Tigers in straight sets.

The Lady Blazers found themselves in yet another back-and-forth game in the first set, trailing 17-16 late in the set. That’s when the Lady Blazers’ offense kicked into high gear and went on an 8-2 run before winning 25-22 on a kill by Roney.

After quickly falling behind early on in the second set 4-0, the Lady Blazers got into a rhythm, eventually taking a 20-14 advantage. VSU then held off a late rally from the Lady Tigers, scoring the winning point on an attack error from Holy Family’s Skylar Osenkarski.

Dias led the charge for the Lady Blazers in the win, falling just short of a double-double with 18 assists and nine digs. Four Lady Blazers had at least five kills, with sophomore middle blocker Christina Pettigrew leading the team with 10 kills.

The Lady Blazers will be back in action on Aug. 31 at 6 p.m. when they face Clark Atlanta in their first home game of the season. After that, VSU will head to Newberry, South Carolina, to compete in the Newberry College Volleyball Invitational on Sept. 2-3.