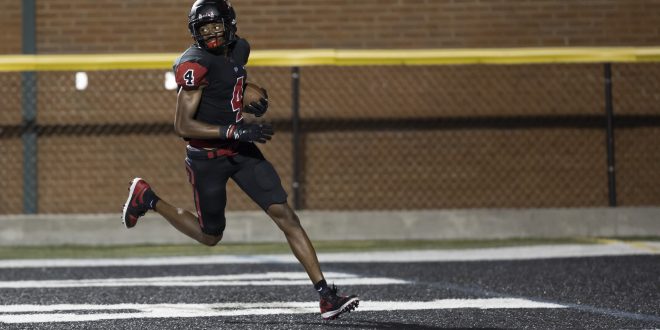 Though finding themselves in a tight battle throughout the game, Jackson believes this game will be a good thing for the Blazers in the long run.

“It was good for us to be in a situation where we were in a fight,” Jackson said. “I think that will help us later on down the road.”

And what a fight it was for the Blazers.

Keiser started the game off with a lengthy 14-play drive that went all the way to the Blazers’ eight-yard line. However, a leaping interception by redshirt sophomore Sean Colman abruptly ended the drive.

The Blazers turned the turnover into points as senior quarterback Ivory Durham connected with graduate wide receiver B.K. Smith for a 45-yard strike on their first play of the drive. The Blazers wound up kicking a field goal to take a 3-0 lead.

On the ensuing Seahawks’ drive, the Blazers’ defense made another red zone stand, this time forcing a turnover on downs from inside their own five.

However, a promising drive for the Blazers quickly went awry thanks to a slew of penalties. The penalties wiped out a would be 42-yard touchdown pass and turned into a third and 41, forcing a VSU punt.

The drive also resulted in the Blazers’ offense getting out of sync, something that would persist throughout the game.

The Seahawks took the ensuing drive and punched it in to take a 7-3 lead.

Both teams then traded three and outs before the Blazers put together another promising drive. However, four straight incompletions shut down the drive as the Blazers turned the ball over on downs.

The Blazers were able to get the ball back before halftime and trim the deficit to 7-6 as Durham went just 7-22 for 110 yards.

Jackson was disappointed with his team’s performance in the first half.

“I didn’t like the standard in the first half,” Jackson said. “That wasn’t us, that wasn’t our standard. We weren’t finishing things. We weren’t tackling well. We weren’t playing with a lot of enthusiasm. Our sideline was dead.”

VSU’s offense began to find their stride in the second half. Durham capped off the Blazers’ opening drive of the third quarter with a 22-yard strike to graduate wide receiver Davie Henderson as the Blazers took a 13-7 lead.

Kesier went tit for tat, however, as quarterback Shea Spencer hit wide receiver Seth Rollie for a 43-yard touchdown to retake the lead. VSU would answer back with a field goal to take a 16-14 lead.

VSU’s defense again came up with a huge stop, forcing another turnover on downs. The Blazers then marched down the field, with senior running back Jamar Thompkins running it in from five yards out to give the Blazers a 23-14 lead heading into the fourth quarter.

Keiser again answered the bell with a touchdown of their own to cut the Blazers’ lead down to just two. However, the Seahawks would get no closer the rest of the way as VSU’s defense stood tall over the final 11 minutes of the game.

Durham led the Blazers back down the field on their next drive, connecting with three different receivers to get them into the red zone. From there, senior running back Seth McGill took it in for an 11-yard touchdown run to stretch the lead back to nine.

Each of Keiser’s next two drives ended in disaster as both senior linebacker Jameon Gaskin and junior defensive back Ravarius Rivers picked off Spencer. The Blazers turned both interceptions into field goals, ending any hopes of a comeback.

Though finishing his night just 17-39 for 270 yards and a touchdown, Durham believes he will find his connection with his new receivers.

“We just got to get acclimated to our receivers and getting out the kinks,” Durham said. “That’s going to build with just time and week by week. We’re going to get back to it and get the timing down.”

While giving up only 21 points, Jackson said the defense was displeased in their performance, despite forcing three turnovers.

“They started slow and gave up some yards,” he said. “We want to keep people under 17 points, so they’re a little disappointed that they got 21. Ultimately, they made plays when plays needed to be made, and that’s what you ask of college defenses. A lot of people got 50 points tonight. We gave up 21. They did tighten up and made plays when they’re supposed to be made.”

The Blazers will next face Virginia Union at home on Sept. 10 at 5 p.m. as part of Family Weekend, and Durham says they will not be looking past the Panthers (1-0).

“We’re not going to take them lightly,” Durham said. “We’re going to be coming in week two, and we’re going to focus on how we need to play.”