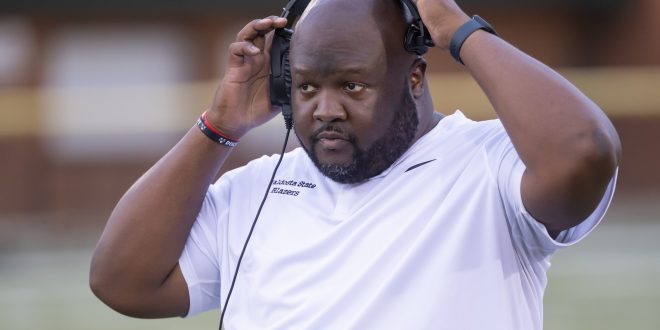 The No. 15 VSU football team (1-1) hits the road for the first time this season as they try to rebound from their first loss of the season, facing winless Miles College (0-2).

Though the Blazers are still licking their wounds following last week’s upset loss to Virginia Union, head coach Tremaine Jackson has said that the team is looking forward.

“They’ve been back to normal,” Jackson said. “One thing we talk about is if we lose a job, we got to move long. After Sunday’s meeting, we moved on, and we got another really talented team in Miles. Our players have had two spirited practices thus far. It’s obvious we got to get fixed.”

In addition to things getting back to normal, Jackson has gotten his team back to the basics.

“We put the training wheels back on our guys,” Jackson said. “We just kind of use the analogy that we’re still new, and everybody feels like we’ve been here for a long time…We just went back to the basics and treat it as though nobody’s ever played for us, and I think that that’s worked out well for us this week.”

In their loss to Virginia Union, the Blazers gave up over 300 yards on the ground. Additionally, despite scoring 40 points, Jackson believes his team missed out on points on several key opportunities.

Offensively, the Blazers will once again turn to senior quarterback Ivory Durham. Durham has thrown for over 600 yards and six touchdowns so far this season.

However, despite Durham completing 63.5% of his passes, the offense has struggled to get into rhythm. Jackson accredits the offensive woes to self-inflicted mistakes.

“You go to back to the first game, and we had some self-inflicting things happen,” Jackson said. “You look at last week, we had some self-inflicting things happen. You just look at the first two series in last week’s game, it should have been 14 instead of six. We caused it not to be 14. So, we left eight points out on the board. You get those eight points, maybe we’d have won 48-45.”

Miles College comes into this game averaging under seven points per game and under 200 yards of total offense. Still, Jackson thinks the Bears are hardly a pushover.

“They’ve got athletes,” Jackson said. “Here’s the deal. Everybody on every level has got good athletes… Miles has a bunch of them. Their kick returner, number nine. People are crazy for kicking him the football.”

Jackson also believes that the Bears have been hit with similar woes to the Blazers.

“They’ve got some woes too,” Jackson said. “You can see it just in the statistics. When you watch the tape, you realize that they should have beaten Alabama State. You realize that they had a couple of miscues last week against West Alabama. We want to make sure we’re clicking on all cylinders because we’re still trying to figure out who we are as a football team.”

With Saturday’s game being the Blazers’ first road trip of the season, Jackson is looking at the trip as an ideal opportunity to create more team chemistry.

Previous Editorial: Hollywood isn’t ‘woke,’ it’s giving underrepresented groups their time to shine
Next Photos: Things to do on campus