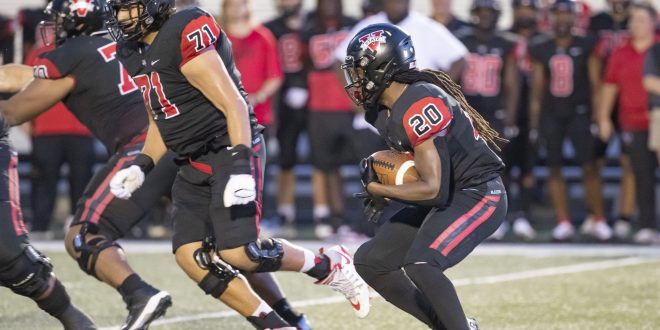 The Blazers enter this game coming off a thrilling comeback win against Shorter. Despite the Blazers trailing the Hawks 17-0 at one point, head coach Tremaine Jackson had no doubt about the outcome of the game as he’s learned a lot about his team’s fight.

“Not one time did I think we were going to lose,” Jackson said. “I just felt like we needed to do some things better, get to the locker room, put together a drive, and we would win. So that happened, and that happened because they executed, and they fought themselves out of a bad situation. So I’m learning a lot about their fight.”

Meanwhile, the Statesmen are coming off two straight impressive road wins. The Statesmen knocked off Mississippi Valley State, a Division I-AA (FCS) team, 28-17 two weeks ago, then turned around and stunned No. 6 West Florida in overtime last week.

While Jackson believes Delta State will use their momentum to have a strong showing, he’s more focused on his team playing good football.

“They haven’t beaten Valdosta State in a really long time, so I fully expect them to try to use this momentum to have a good game against us,” Jackson said. “The way we look at it is everybody’s going to do that every week anyhow. We still have yet to see our best version of ourselves, and that’s what we’re focused on.”

Additionally, Jackson is not only viewing this game as a measuring stick for the Blazers but also has high praise for Delta State.

“This is a good football team in Delta State that we’re about to play,” Jackson said. “Also, you know, we are playing our second Gulf South Conference game. It’s kind of like baseball’s hunt for Red October, right? Like we’re sitting, you look at our October schedule; it’s pretty tough, and we start off with who I think is the best team in the league right now and the hottest team in Delta State.”

Though the Blazers have yet to put together a complete game, that holds especially true for special teams.

Additionally, Jackson believes this game could come down to special teams play. A big reason Jackson thinks why Delta State upset West Florida was because of a 96-yard kickoff return for a touchdown by wide receiver Tyler Kennedy.

“We’re looking for 60 minutes of disciplined, obedient and grit football in every phase of the game,” Jackson said. “Still haven’t had that. Nobody knows what it looks like, and so in that phase of the game, that’ll get you beat. They’ve got some guys on special teams that we don’t want the ball in their hands, and if we don’t do that the right way, it’ll get us beat.”