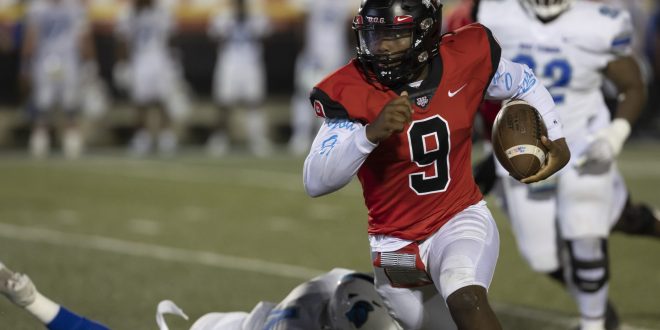 The Blazers (4-6, 2-5 Gulf South Conference) pushed the game into overtime when the Blazers intercepted No. 8 West Florida Argos (8-1, 6-1 GSC) in the red zone.

However, the Argos still prevailed on a two-point conversion to win 32-31.

Head coach Tremaine Jackson sees the loss as a tough pill to swallow.

“It’s tough for me because I go into that locker room every day, and I go in with a bunch of guys that continue to fight,” Jackson said. “That’s not equaling to wins right now, but our guys are fighting.”

The Blazers started off the scoring in the second quarter with a 41-yard pass from senior quarterback Ivory Durham to senior wide receiver Victor Talley to make it 7-0.

The Argos followed it up with a 43-yard pass from quarterback Peewee Jarrett to wide receiver Nate Howard.

Senior running back Jamar Tompkins had a one-yard run late in the second quarter that put the Blazers in the lead 14-7 heading into halftime.

The Blazers answered with Durham throwing a one-yard touchdown pass to senior running back Seth McGill to put VSU back in front.

Going into the fourth quarter, VSU retook the lead as sophomore kicker Estin Thiele kicked a 44-yard field goal to push the score to 24-21.

The Blazers weren’t in the lead for long as kicker Griffin Cerra kicked a 36-yard field goal for the Argos, tying the score at 24-all.

After the Blazers went three-and-out, the Argos had a shot to win the game. However, the Blazers’ defense stood tall as junior defensive back Eric Ross picked off Jarrett.

Durham was quick with the first possession of overtime, speeding to the outside and down the sidelines into the end zone, making it 31-24.

The Argos looked to Jarrett on fourth-and-3. He extended the game with a six-yard run. On the next play, Jarrett threw the ball to Leggett for a 12-yard touchdown.

Rather than send the game to a second overtime period, the Argos went for two and the win. Jarrett kept it himself and scored, slamming the ball into the end zone and smiling in the direction of the VSU student section.

Jackson knew going in that Jarrett was going to be a huge factor.

“We wanted to make him beat us, and tonight he was able to do that,” Jackson said.

Still, this will go down as a devastating loss for the Blazers to one of their biggest rivals who they just can’t seem to get past.

With just one game left on the schedule, the Blazers will finish below .500 for the first time since 1999. Still, the past two games have given Blazer fans some renewed faith in the team.

The Blazers close out their season on Nov. 12 at 3 p.m. against Shorter at home. The Blazers beat Shorter earlier in the season, 34-31, in Rome, Georgia.

Previous Photos: Housing spooks students at Hallaballoo event
Next VSU students are Running to the Polls for the 2022 Midterm Election