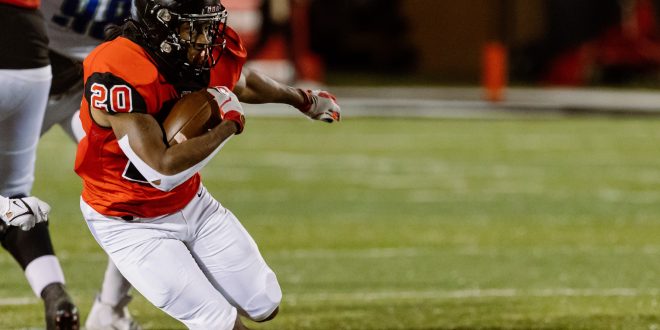 Senior quarterback Ivory Durham helped set up sophomore kicker Estin Thiele for a 25-yard field goal with under two minutes in the game. Then, Blazers’ defense stood tall on fourth down and ended the Hawks’ last-ditch effort.

On top of it being the senior game, the game also pitted the Hawks and Blazers against each other for the second time this season. The Blazers also won the first matchup, 34-30, in Rome, Georgia.

This win was much more special for both the players and head coach Tremaine Jackson.

The game was particularly special for senior running back Jamar Thompkins, who broke the record for career rushing yards. Cedric O’Neal, who played from 2012-2015, previously held the record.

Thompkins broke the record on a 66-yard touchdown run that put the Blazers up 17-7 in the second quarter.

Thompkins recalled his teammates saying he’d break the record on a big run.

“The whole day, the whole week really, my o-linemen were telling me like, ‘Yo, you’re gonna get it on a big run,’” Thompkins said. “I just had faith in them, and I guess we manifested it—it came true.”

While the Blazers were able to jump out to a 17-7 lead, it was rough sledding early.

A blocked punt set up Shorter in prime field position. They capitalized as quarterback Harold Cook kept it himself on fourth down and scored from four yards out.

The Blazers eventually pulled ahead 10-7 on a one-yard touchdown run by senior running back Seth McGill.

After Thompkins’ touchdown run, though, Shorter pulled back within three late in the half as Cook connected with wide receiver John Dickerson IV for a 13-yard touchdown pass.

The Blazers tacked on a field goal on their first drive coming out of halftime.

That’s when things started getting dicey.

Multiple penalties on VSU allowed the Hawks to retake the lead as running back Devin Brown punched it in from 12 yards out.

The Blazers were still able to score on that drive to retake the lead as Durham found freshman wide receiver for a 34-yard touchdown pass.

The Hawks didn’t wait long to retake the lead. The Hawks again went for it on fourth down, this time on fourth and goal, and scored on a 5-yard pass from Cook to Brown.

With the Blazers needing a stop to get the ball back, freshman linebacker Terrell Dudley and the Blazer defense delivered. Dudley hurried Cook into throwing it on third down, resulting in an incompletion and a stop.

Durham immediately went to work on offense, connecting with graduate wide receiver B.K. Smith for a 30-yard gain. A few plays later, Durham had a 17-yard rush to get the Blazers inside the red zone.

The Blazers then set up Thiele for the go-ahead field goal with a minute and a half to play.

The Blazers’ defense then came up big with a four-and-out as they forced three straight incompletions to end the game.

The fourth down stop reminded Jackson of last week when the Blazers couldn’t stop West Florida on fourth-and-3 in overtime. West Florida wound up winning 32-31.

“That was a big fourth down, a fourth-and-2,” Jackson said. “We were we just here a week ago on fourth-and-3 and couldn’t get off the field. I don’t care who you’re playing, what level they are. Two yards is two yards everywhere in America, and it’s really a short yardage.”

The game marked the end of an era as the prolific backfield of Durham, McGill and Thompkins all played their last game as a Blazer.

Thompkins believes that their legacy will help the program moving forward.

“This legacy that we’re leaving is going to be big,” Thompkins said. “It’s going to help bring in guys just like us or better than us that will help this program out, hopefully. But that’s three, and we’re the three-head goat, so that’s going to take a lot of work.”

While the Blazers’ season is over, Durham said that those returning next year should learn from VSU’s mistakes this season.

“I just told them to just learn from the mistakes that we made this year and to capitalize off the ones that were not, and the Valdosta State Blazers will be back on top,” Durham said.