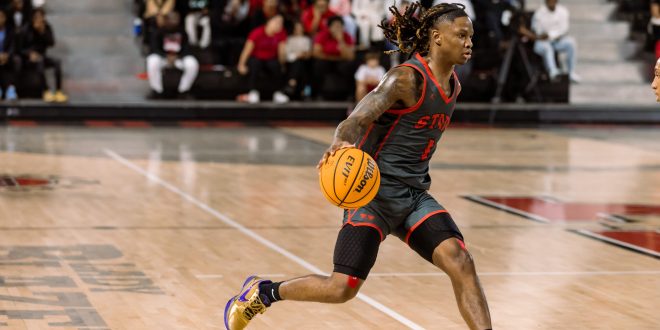 The Blazers just couldn’t seem to miss against Shorter.

“Last year, I felt like he would come in the game and prove to me that he’s a good player and try to do maybe a little too much,” Helfer said. “This year, he’s just letting the game come to him and taking easy stuff, and look what’s happened. He’s turning into a great player, and so I’m proud of him for kind of making that kind of mental adjustment.”

Shorter and VSU both traded baskets to open the game, with the Hawks taking an early 9-8 lead.

That’s when Fofana and the Blazers kicked it into high gear. A 13-0 run gave the Blazers a double-digit lead.

The Blazers’ defense also stepped up, forcing 11 turnovers in the first half.

Fofana scored 18 points in the first half as the Blazers took a 51-24 lead at the break.

VSU’s dominance continued into the second half.

After Shorter mounted a small 5-0 run, the Blazers closed the door on any comeback attempt with a pair of dunks.

Helfer said he called a timeout to prevent a run by Shorter.

The Blazers continued their torrid scoring pace in the second half, going 18-35 (51.4%) from the field.

Senior guard Cam Hamilton was a big reason for the hot second-half shooting, scoring 11 points off the bench.

Helfer is hopeful that Hamilton’s performance will help get him going as the season goes on.

“Cam’s a great kid, and I told him before the game everybody on the team loves that kid,” Helfer said. “And we know that we need Cam Hamilton. He’s important to us. He’s experienced; [he’s] just playing up and down a little bit. I hope tonight will get him jumpstarted. I think it will, and, you know, we’re excited about that.”

Graduate guard Ryan Black also helped keep the game out of reach, recording 16 points and seven rebounds off the bench.

“Yeah, he came in, and I thought, you know, when he sees an early one or two go in, that obviously helps a shooter,” Helfer said. “He didn’t force it, you know, and he’d let shots come to him kind of like Cam did. We need both of those kids. They’re both great players.”

The Blazers finished off their three-game homestand with a 121-92 win against Clinton College on Nov. 22.