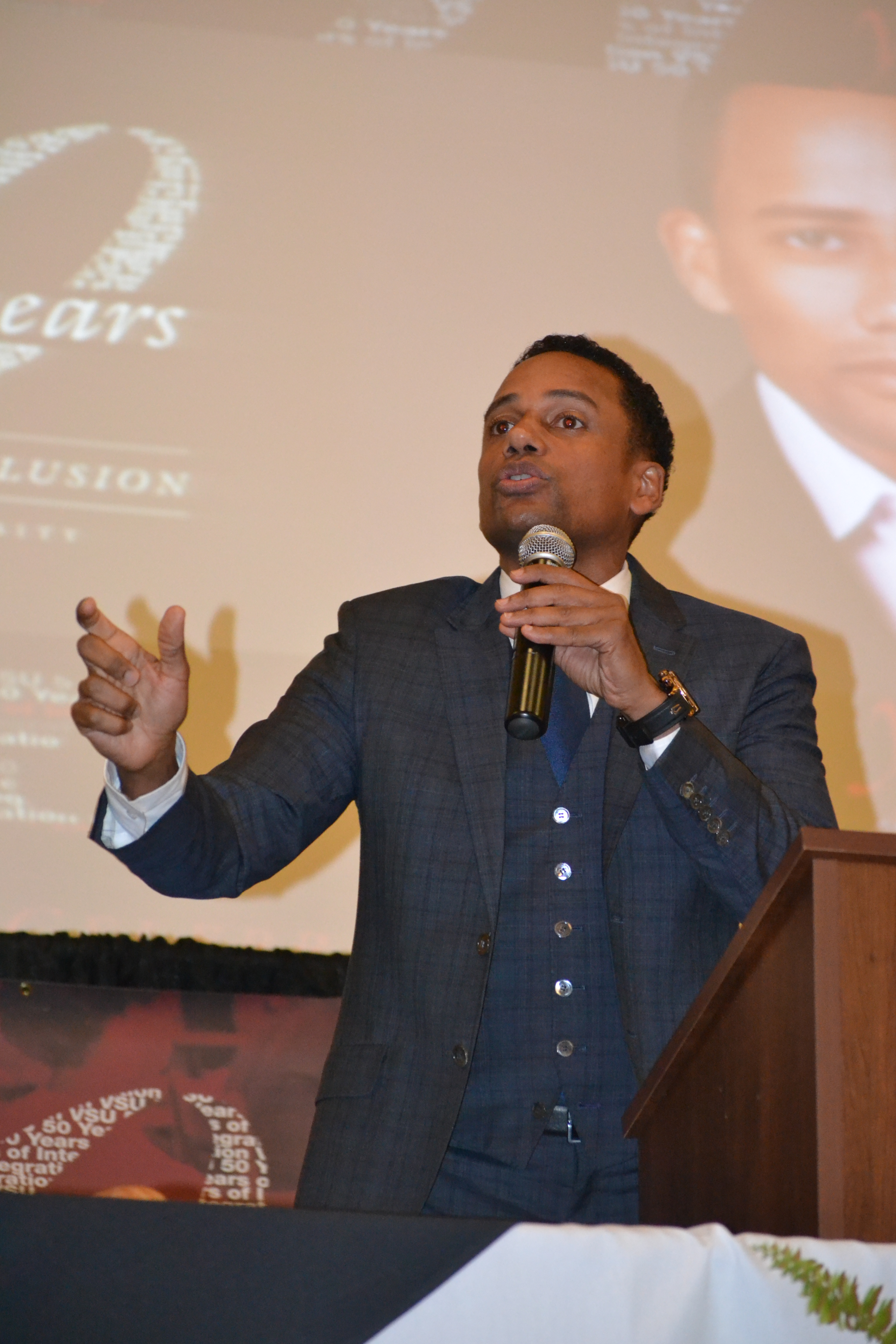 Hundreds of eyes gazed in a hypnotic state as Hill Harper captivated the attention of anyone near the Student Union ballrooms Tuesday during the VSU event titled “Celebrating 50 Years.”

The Harvard Law graduate served as the keynote speaker of the 50 Years of Integration committee’s biggest event of the school year. Students, faculty and staff collaborated in a night of child-like expectation to see the writer, actor and activist speak on passion, energy and the importance of courage.

Harper has written five books that have all been on The New York Times best-seller list. His most recent work, “Letters to an Incarcerated Brother,” talks about the U.S.’s incarceration rates, the effects it has on minorities and the potential solutions on reversing such.

The night started with a press conference with Harper followed by a VIP reception that preceded his speech. Attendees were occupied with videos that highlighted the pioneers of integration at VSU in various areas: the first students to integrate the university and the first African-American faculty member, among others.

Then came the moment everyone was itching to see.

Harper appeared on stage with an unspoken energy. Before he uttered a single word, eyes were affixed to his tailored, grey pinstriped suit, and the level of excitement was extremely high. Then, he began.

The activist spoke of passion and its importance. He asked the crowd, “What makes your heart beat faster?”

He noted that anything that provides such energy to your life should be reciprocated with that much energy in the form of effort. Energy like this was evident not only in his voice and in the attention he showed to each and every ticket holder but also in the social media that trickled out after the event.

“Man, @hillharper was AMAZING today…Im so glad that I was able to experience his essence of greatness today #HillHarperVSU,” Twitter user “Jamal_No_CBear” said.

“Hill Harper’s interactive message was so energetic, passionate and inspiring,” Hardin said. “He made me want to become better at whatever I am encouraged to pursue in my life.”

In terms of the 50 years celebration, Harper said in the press conference that we all should expand our “circle of care,” a concept that he would expound upon later that evening and that he alluded to by saying “when folks talk about division, I want to talk about inclusion.”

Harper ended his speech with a call to action.

“I will not allow fear to stop me from making the choices that I know I should make,” Harper said. “Instead, I shall act from my heart.”

The audience eagerly repeated his words.

Tuesday’s celebration will be nothing short of a fantastic memory for many attendees. The interviews, Harper’s speech, his personal interaction with the crowd and the handshakes during the book signing certainly left a deep impression on the crowd.

“He delivered a great message, gave excellent advice, and engaged the entire room,” Selenseia Holmes, administrative coordinator of the Office of Social Equity, said. “I couldn’t be more pleased with the way the event turned out.”
­