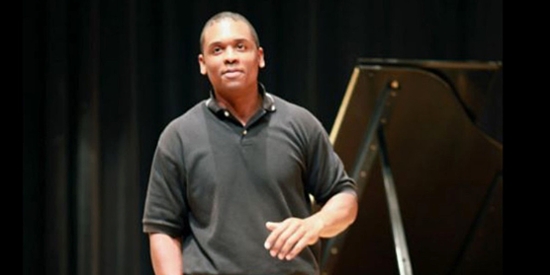 Jazz, caribbean rhythms flow through Pops in the Park

Pops in the Park was hosted by the Music Scholarship Alliance on Thursday, Oct. 5th at the Fine Arts Building Amphitheatre.

Flowers is the owner and chief executive officer of Enhanced Sound Music Group LLC. He has a passion for sharing and teaching music to others which led him to play at events all over Georgia. Flowers graduated from VSU in 2007 with a Bachelor of Music in music performance, and he is working to release his first jazz single and album.

Nycholas Lewis was one of 21 students that performed in the VSU new jazz ensemble group.

“Performing in it was truly amazing, but the best part was after the performance when people were walking up and encouraging me to continue doing what I was doing,” Nycholas Lewis, a freshman music major, said.“The event had a large group of supporters which is good. It shows the people who are performing that the audience believes in them and are interested in seeing the amazing show that we can put on with our instruments.”

Carol Krueger, a doctor of musical arts, believed this event was a success for everyone.

“Every year the Spotlighters look forward to this event because they get to perform in a non-formal environment with broad arrays of different types of music,” Kreuger said. “It also gives them a chance to see more of their peers in the instrumental world, and this event gives the audience an insight into the talent at VSU.”

Aside from the performances, there was a silent auction that took place. Pops in the Park attendees had the chance to bid on a collection of painted drumheads provided by VSU’s Department of Art and Design.

The attendees and performers enjoyed an evening filled with musical performances and art work while surrounded by their peers.

Previous Midterm grades can impact withdrawals
Next De-stress after midterms