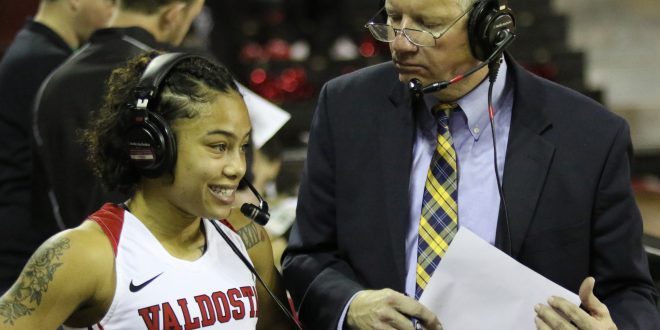 Kayla Bonilla (3) ranks third in the GSC in free-throw percentage at .917.

Sophomore Guard Kayla Bonilla led the charge for the Lady Blazers, scoring a total of 19 points on Saturday afternoon. The game seemed dark in the first half, but their brightest—and shortest—star shined through the cracks.

Of Bonilla’s 19 points, 12 were scored in the second half as the Lady Blazers overcame a 10-point deficit to beat Albany State 65-53. Valdosta State improved to 2-0, leaving Albany State in the dust at 0-2.

Bonilla served as the annoying insect all game as the Golden Rams found it hard to get rid of her intensity.

“When we came into the locker room at the half, coach said, ‘Somebody needs to pick up the intensity,’” said Bonilla, who came away with a game-high three steals. “I wanted to be the one to do that.”

In the first 20 minutes of play, VSU registered more turnovers (12) than field goals (9). Despite their butterfingers, they trailed by just two at halftime, 29-27.

“A lot of looks we thought we had during practice, that worked there, just wasn’t there in the actual game based on their defense,” Bonilla said. “We are going to be more patient with the ball.”

Head Coach Carley Kuhns correlated the turnovers to just the speed her team has.

“I think this is one of the fastest teams I have ever coached, so we just have to figure out how to utilize all of that quickness and be a little bit smarter and careful with the basketball,” Kuhns said. “I think we are just a little bit ahead of ourselves and part of it is just we are so fast.”

Albany State led 40-30 with just a bit under seven minutes to go in the third quarter. The Lady Blazers put on a string of game-altering plays.

After halftime, the Blazers shot 21 free throws and connected on 14. They committed just five turnovers.

The Lady Blazers will go on the road to face the Palm Beach Atlantic Sailfish on Monday, Nov 19. The game is slated to begin at 5:30 p.m.