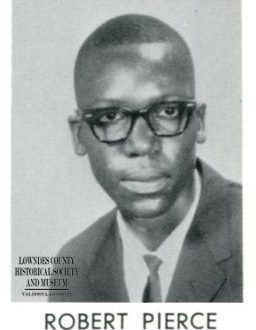 In the spring of 1963, Drewnell Thomas and Robert Pierce Jr. walked across a stage to receive their high school diplomas from Valdosta’s all-Black Pinevale High School. Then they walked right into the history books.

Thomas and Pierce both graduated with honors from Pinevale, but another academic achievement managed to outshine that one: Thomas and Pierce were the first Black students to attend VSU, then Valdosta State College. 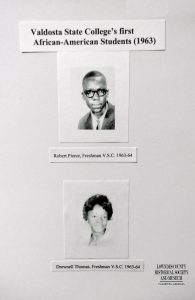 Pinevale High closed its doors for the final time in 1972, but the impact its two 1963 graduates had on the VSU community lives on today.

Though the U.S. Supreme Court decided in the landmark 1954 case Brown v. Board of education that “separate facilities” in public education are “inherently unequal,” much of the southern U.S. saw vestiges of a racist system remain in place into the next decade.  But then-University President Dr. J. Ralph Thaxton had other plans for VSU.

Thaxton oversaw multiple major changes at VSU during his eighteen-year tenure, including the decision to expand the school’s enrollment to include male students, the construction of several buildings still on campus today (including Nevins Hall, Pound Hall and Palms Dining Center), and the introduction of intercollegiate sports to the university. But it was the university’s welcoming of the two Pinevale alumni in 1963 that had perhaps the most impact. Thaxton wrote in 1964 that he believed that “we had the field rather well prepared for integration when the opening of the college came.”

But it wasn’t without some protest, limited though it was. A group from Americus, Georgia, protested the decision to allow Thomas and Pierce to attend VSU. Thaxton contends that “we were threatened with some disorder by a group,” but that a group of Georgia Highway Patrolmen and local police officers “discouraged” the group, preventing “disorder of any kind.” The nature of the scene that played out upon the two new students’ arrival seems to reflect the general history of integration in Valdosta itself. Historical record contends that there was little unrest or discord in Valdosta surrounding the issue of integration. The Lowndes County Historical Society writes that in Valdosta, “the end of segregation came gradually, with little heated conflict.” In some ways, Thomas and Pierce’s experience at VSU was a reflection of the climate in Valdosta. There may have been little “heated conflict,” but their experience was still far from perfect.

Thomas in particular dealt with a degree of animosity from classmates, with the Campus Canopy, predecessor to the VSU Spectator, writing in May of 1967 that “unlike Pierce, [she] had encountered open animosity in students” and incidences of name-calling.

Both students were more concerned with academic success than whatever welcome they may or may not have received. “I didn’t care if they liked me or didn’t like me,” Thomas told the Canopy. Pierce agreed, saying that less social activity offered him more time “to concentrate on my academic studies.”

John Gayle, long before his tenure as Mayor of the City of Valdosta, attended VSU during that first history-making semester for Thomas and Pierce.

Gayle, a lifelong Valdostan who was a student at then-VSC from 1961 to 1966, remembers a mostly-amicable acceptance of the two new students’ presence on campus.

Gayle said he never knew Drewnell Thomas, but that he saw Robert Pierce around campus a few times. Though he admits that Pierce seemed a bit lonely, he describes the reaction students had to their presence as “mostly cordial.”

“I don’t recall any real protests or stand-offs, anything like that,” Gayle said. “It just happened.” Gayle contends that Valdosta has always been a welcoming community, and that Thomas and Pierce’s integration into the VSU community was reflective of the city’s generally peaceful transition towards integration.

Gayle said Valdosta residents could turn on the news and see serious conflicts over integration play out in other parts of the South, but that Valdostans didn’t have that problem at home.

“Valdosta’s always been an accepting city,” he said. “We’ve had no problems with integration.”

To Gayle’s point, the wheels of progress in Valdosta and at VSU continued to turn throughout the 1960s. The Campus Canopy wrote in that same 1967 article that “[Pierce] feels that the atmosphere is changing and that students have become friendlier.”

By 1965, Aurelia Register had enrolled as the third Black student to attend VSU. And in 1970, VSU would hire its first Black faculty member, twenty-four-year-old Louis Dunbar, an associate professor in the School of Education.

From a slow trickle in the sixties and seventies to nearly a third of the student population today, VSU has come a long way towards a diverse and welcoming academic landscape. And we all have Drewnell Thomas and Robert Pierce to thank.